Report: Aaron Hernandez May Have Instructed His Girlfriend to Dispose of Weapon Day After Body of Odin Lloyd Discovered - NESN.com Skip to content BRISTOL, Conn. — Investigators searching for the gun used to kill a semi-pro football player are looking into whether former New England Patriots tight end Aaron Hernandez asked his girlfriend to get rid of the weapon shortly after the victim’s body was found about a mile from his home.

The Bristol Press reported Friday that search warrants for a Bristol storage facility suggest Hernandez may have instructed Shayanna Jenkins to take a gun safe or lock box out of his home in North Attleboro the day after the body of Odin Lloyd was discovered.

The warrants claim that Jenkins was seen on surveillance video footage carrying a rigid object the size of a lock box or safe out of the house and into the yard, before loading it into her sister’s car. She allegedly asked to use the vehicle to go to the bank and returned home about 35 minutes later without the object.

The warrants claim that Jenkins may have dumped the weapons in the woods in Massachusetts or may have taken them to a Bristol storage unit that Hernandez paid for.

Jenkins did not respond to an email Saturday seeking comment. Hernandez’s attorney did not immediately return a call for comment.

Hernandez was cut by the Patriots and has pleaded not guilty to a murder charge.

Hernandez’s cousin, Tanya Cummings-Singleton, has been jailed in Massachusetts since Aug. 1, but authorities won’t say why.

A recent affidavit says that after Lloyd’s killing, Cummings-Singleton bought a bus ticket for Ernest Wallace, who’s believed to have been with Hernandez the night Lloyd died. Wallace later surrendered in Florida. He has denied a charge of accessory to murder after the fact. 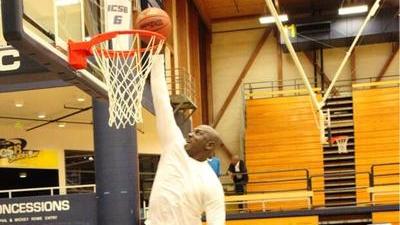