In an attempt to make the game safer, the NHL enacted a new rule in the offseason that prohibits players from removing their helmets before engaging in a fight.

If a player breaks this rule, he’s given an additional two-minute penalty for unsportsmanlike conduct. After the first few weeks of preseason games, it’s clear that the players haven’t adjusted to the new rule change yet.

?It doesn?t look like its overly popular right now but they?ll have to get used to it. When you talk about what the league?s trying to do, it?s trying to make this game safer,” said Bruins head coach Claude Julien in his postgame presser on Monday night. “You?ve seen guys — and I think you?ve seen some in preseason — that have fallen and knocked their heads on the ice and it turns into concussions and they split their heads open. That can be dangerous. It?s the league taking precautions to try and make the game safer and eventually the guys will get used to it.?

This change should lessen the amount of players who suffer head injuries from fights, but as Bruins forward Milan Lucic told reporters after Monday’s 3-2 overtime win over the Washington Capitals, there are other injuries that could become more common as a result of the new rule.

“I don?t know, I know with the mandatory visors and not being able to take off your helmet, you?re going to see a lot more guys punching a lot more helmets and maybe guys breaking their hands a lot more just from hitting a helmet,” said Lucic. “So it?s one of those rules that the NHL felt like they needed to make; regardless of what I think of it we still have to live with it.”

Not long into the preseason, enforcers tried to find a loophole in this rule. Krys Barch and Brett Gallant found one by taking each other’s helmet off before fighting last week. Since the helmets were removed by opposing players, the referees didn’t give Barch and Gallant an extra penalty as seen in the video below.

This clever tactic might be why Julien was confused that Bruins defenseman Kevan Miller was given a minor penalty for unsportsmanlike conduct after his tussle with Capitals forward Aaron Volpatti on Monday night.

?I told the referee we should have had a two-minute power play on that because, well, Volpatti took his off but then he took Miller?s off,” said Julien. “So we shouldn?t have had a penalty right? [The referee] just laughed at me. I was actually making fun a little bit of what just happened. Guys are trying to be creative. Obviously it?s a tough rule. I guess you have to abide by it, but players are always looking to get around those kinds of things.”

The league will need to clarify this rule a little more before the regular season begins because there is too much confusion among the players and coaches right now. But regardless of any revisions that are made, it’s going to take a while for players to adjust because removing your helmet before a fight has been standard procedure for quite a while.

It’s impossible for the Department of Player Safety to eliminate all of the injury risks involved in fighting, but it must make a strong effort to protect players from head injuries, which is exactly what this new rule is designed to accomplish. 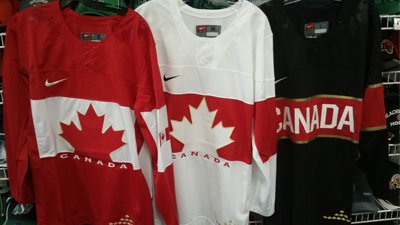