David Ortiz Completely Changes Complexion of ALCS With One Swing on Special Night at Fenway - NESN.com Skip to content BOSTON — Pull up a chair, R.L. Stine. Only sports can produce the goosebumps that Red Sox fans felt just before midnight Sunday.

Game 2 of the ALCS was mind-numbingly similar to Game 1 for the first seven-plus innings, and Boston faced the nightmarish possibility of falling into a 2-0 series hole with Justin Verlander pitching Game 3 in Detroit. David Ortiz then flipped a Joaquin Benoit changeup, Torii Hunter?s limp body and the ALCS script with one swing of the bat.

Tigers manager Jim Leyland turned to his closer with two outs in the eighth inning and the Tigers leading 5-1 after Dustin Pedroia singled into right field to load the bases. Ortiz — as he?s done time and time again throughout his 11 seasons in Boston — seized the moment.

Boston?s franchise cornerstone ripped Benoit?s first pitch into the Red Sox? bullpen for a game-tying grand slam. Hunter, who ran full speed after Ortiz?s line drive, tumbled into the bullpen in the most metaphoric manner. The ALCS had truly been turned upside down.

?We?re going to play it to the final out,? Red Sox manager John Farrell said for seemingly the millionth time this season. ?David so many times has come up big, whether it?s regular season, postseason. No bigger than tonight.?

Ortiz?s grand slam erased a 5-1 deficit and, more importantly, concerns about whether the Red Sox? offense would ever break through against Tigers pitching. Boston had been just 3-for-51 with 30 strikeouts before the eighth inning of Game 2, and with Detroit?s ace in line to start Game 3, it looked like the Red Sox? Cinderella season would inevitably end at the hands of the defending American League champions.

Now, the series is even, as Jarrod Saltalamacchia completed Boston’s incredible Game 2 comeback with a walk-off RBI single in the bottom of the ninth inning. Salty?s single plated Jonny Gomes, who kicked off the ninth inning with a ground ball into the hole, advanced to second base when Jose Iglesias delivered an errant throw to first and moved up to third base when Rick Porcello uncorked a wild pitch.

?In those pressure moments, we’ve seen — there’s complete trust in Jonny,? Farrell said. ?And against Porcello, we knew it was going to be sink or slider, and felt Jonny was equipped to handle that. He did some broken ground ball in 5 and 6 hole that Iggy probably makes an extended play and we catch a break for the error. But late in the game, Jonny’s going to keep things under control at the plate.?

Calm, cool and collected, even under the direst circumstances. That pretty much sums up this year?s Red Sox team, which has continuously put its best foot forward in the face of adversity. But even though we?ve seen the Red Sox rebound before, there was something truly unique, truly resilient and truly special about the way Ortiz and Co. changed the complexion of the ALCS with the snap of a finger Sunday night at Fenway.

?Tonight is almost a tale of two different games inside one,? Farrell said after the improbable comeback. ?Their pitching basically dominated us. But [Shane Victorino] gets the two-out base hit [in the sixth inning], Pedey gets the ball off the wall, and there was a little bit of life injected into us. We keep coming. That?s been a characteristic the entire season, and it was on display here tonight. And once again, our guys don?t quit until that last final out is made.?

Ortiz’s series-altering grand slam was the first of his illustrious postseason career and the fourth grand slam in Red Sox postseason history. Boston’s last playoff grand slam came off the bat of J.D. Drew in Game 6 of the 2007 ALCS. We all know what happened that season.

The Red Sox have a long way to go before 2007’s World Series celebration repeats itself, but Boston swung momentum in its favor with Sunday’s unlikely comeback. If any hope started to fade among Red Sox fans, it was quickly restored with Ortiz’s latest heroics. 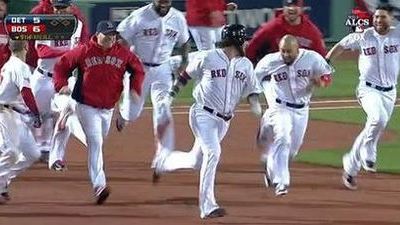