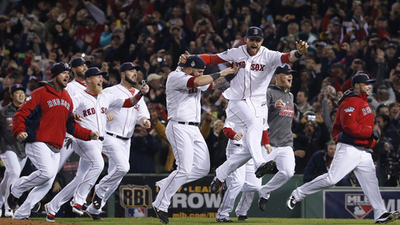 The 2013 Boston Red Sox achieved so much during the regular season and postseason that it can be hard to recall each individual triumph and success of the roster full of over-the-hill or under-powered players. The players found cracks in the daunting pitching staffs of Tampa Bay, Detroit and St. Louis, while the pitching of John Lackey, Jon Lester, Jake Peavy and Koji Uehara rose to an otherworldly level.

Everyone had their moment. World Series MVP David Ortiz put together one of the best World Series ever. It took Shane Victorino one swing to cement himself in Boston sports history. Jonny Gomes proved himself battle-tested.

The Red Sox accomplished such a rare complete turnaround from their 2012 season that finishing last and then winning it all in consecutive seasons has only been done once before — by the Minnesota Twins in 1990-91.

The journey from last in the AL East to best in baseball is enough to make any diehard fan’s head spin, so let’s take a look back a the Red Sox’ final triumph in the World Series.

Check out the links below for the some of the Red Sox’ greatest moments of the World Series.

Jonny Gomes Knocks Sabermetrics, Says ‘You Want Me to Go to War With’ After Red Sox’ World Series Win (Video)