After jumping for joy and throwing out some ferocious fist pumps when the Canadian women’s hockey squad stunned Team USA in the gold medal game earlier in the week, the embattled mayor was at it again when the men’s team won gold in Sochi.

Canada blanked Sweden 3-0 to win a second consecutive gold medal, and Ford took to the streets of Toronto to celebrate the impressive feat. Dressed in his Sunday best and a Canada tie, the 44-year-old was loving life so much that even running directly into a fire hydrant and appearing to injure his groin couldn’t wipe the smile off his face.

Check out the celebration gone wrong in the photo below. 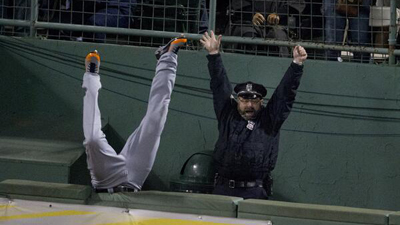