Peyton Manning was only one vote away from being named a unanimous NFL MVP.

We now know who that lone vote belonged to — former NFL quarterback Jim Miller, who voted for New England Patriots quarterback Tom Brady. Miller and Brady were teammates with the Patriots in 2004.

“It pains me because Peyton had such a historic season,” Miller said, via The Denver Post. “He is the offensive player of the year, no question. But having played the position, when I looked at who had the most value to his team, I thought Tom Brady carried that team the same way Adrian Peterson carried Minnesota last year.”

Manning set NFL single-season records with 5,477 yards and 55 touchdown passes for the 13-3 Denver Broncos. He completed 68.3 percent of his passes with 10 interceptions and a 115.1 rating.

Brady passed for 4,343 yards and 25 touchdowns with 11 interceptions while completing 60.5 percent of his passes. The Patriots signal-caller had an 87.3 passer rating while leading New England to a 12-4 record, despite losing players to injury, free agency and arrest. 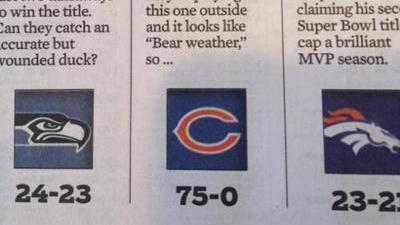