Final, Rays 8-0: The Rays nailed down the victory in the bottom of the ninth.

Jeff Beliveau worked around a walk and a single to record the final three outs.

Clay Buchholz, who started Tuesday’s tilt, went one inning and surrendered one earned run on three hits while striking out one and walking one.

Rubby De La Rosa was roughed up in his two innings of work. The hard-throwing right-hander was charged with four earned runs on five hits while striking out one and walking two.

Alex Hassan led the way with two hits for the Red Sox, who went 0-for-9 with runners in scoring position and left nine men on base.

Mid 9th, Rays 8-0: Chris Hernandez scattered two singles and a walk before escaping the top of the ninth inning unscathed.

Curt Casali led off with a single into center field. Justin Christian then dropped a single of his own into center, and Corey Brown came up firing. Casali initially slid in safely at second base, but he got tangled up with shortstop Deven Marrero and came off the bag. Marrero tagged Casali for the inning’s first out.

Hernandez struck out Jake Hager and retired Jerry Sands on a ground ball to third base.

End 8th, Rays 8-0: Daniel Nava pinch hit for David Ortiz in the eighth inning and singled on a line drive to center field.

Chris Hernandez will work the ninth inning for Boston.

Blake Swihart got plunked to begin the bottom of the seventh inning, but Mike Montgomery struck out Corey Brown and induced an inning-ending double play off the bat of Brock Holt.

Mid 7th, Rays 8-0: Jose Mijares worked around a walk and a single to complete a scoreless inning.

End 6th, Rays 8-0: The Red Sox made some loud outs and put a couple of runners on base in the sixth inning. Nothing changed on the scoreboard.

Mike Napoli and Jonny Gomes each flied out to left field to begin the inning.

Xander Bogaerts walked and Will Middlebrooks singled with two down, but Alex Hassan flied out to end the sixth.

Wil Myers reached to begin the inning and swiped second base without a throw from Boston’s new catcher, Blake Swihart.

Cordero didn’t let Myers’ activity on the bases affect him, though, as the 38-year-old struck out two hitters in the inning.

End 5th, Rays 8-0: Alex Hassan has had a nice afternoon, collecting two hits, including a single in the fifth inning.

The Red Sox couldn’t do anything with Hassan’s leadoff knock in the fifth inning, though. Brad Boxberger worked around Hassan’s single and Grady Sizemore’s walk to keep the Red Sox scoreless.

David Ortiz struck out to end the inning. Big Papi is 0-for-3 with two strikeouts and three men left on base.

Francisco Cordero will be the new Red Sox pitcher in the sixth inning.

Brayan Villarreal was the latest Red Sox pitcher to get roughed up in the fifth. Jose Molina doubled and Kevin Kiermaier walked after Rodriguez’s big blast, setting the stage for Hak-Ju Lee’s two-run, two-out double.

Mike Napoli walked and Jonny Gomes singled to left field after David Ortiz grounded back to the mound to begin the inning.

Xander Bogaerts, who was robbed by second baseman Sean Rodriguez earlier in the game, ripped a line drive to third base that Logan Forsythe snagged. It was another loud out for Bogaerts.

Will Middlebrooks grounded to short to end the inning.

Mid 4th, Rays 5-0: Andrew Miller, who issued three walks in his first spring training appearance, walked the first batter he faced. The left-hander then settled down from there.

End 3rd, Rays 5-0: The Red Sox threatened to get something going offensively in the third inning, but Mark Lowe managed to keep the score 5-0.

Alex Hassan and Dan Butler connected on back-to-back singles in the third after Will Middlebrooks struck out to begin the inning.

Grady Sizemore nearly shot a ground ball through the right side, but first baseman James Loney made a nice stop before delivering a good chuck over to second base to retire Butler.

Dustin Pedroia popped out into shallow right field to end the inning.

Mid 3rd, Rays 5-0: Things didn’t get any better for Rubby De La Rosa in the third inning. And the situation might have snowballed even more had it not been for an excellent snap throw by catcher Dan Butler.

Matt Joyce dropped down a bunt to begin the inning, beating the Red Sox’s infield shift for a leadoff single.

The Rays looked poised to tack on some more runs, but Butler caught DeJesus leaning at first base.

End 2nd, Rays 4-0: John Farrell went out for a conversation with home plate umpire Clint Fagan in the bottom of the second inning.

Mike Napoli began the inning with a rocket to third base. The ball ate up Logan Forsythe and ricocheted away, allowing Napoli to reach. The play was scored a hit because of how hard it was hit.

Jonny Gomes then hit a sharp ground ball to third base that resulted in a 5-4-3 double play. Gomes hardly left the box, contesting that it was a foul ball, but Fagan disagreed. That brought out Farrell for a brief chat.

Xander Bogaerts smoked a line drive with two outs that look destined for center field. Sean Rodriguez made an excellent leaping catch to rob the 21-year-old.

De La Rosa issued a leadoff walk to Jose Molina. David DeJesus, who roped a ground-rule double in the first inning, drilled a line drive into the triangle in the second inning that plated Molina from first base. (That’s saying something, given Molina might be the slowest player in baseball.)

De La Rosa rebounded to strike out Yunel Escobar for the second out, but James Loney absolutely crushed a two-run homer over the right field wall to give Tampa Bay a 4-0 advantage.

Wil Myers grounded to shortstop Xander Bogaerts to end the inning. Mike Napoli made a nice play to pick Bogaerts’ throw in the dirt at first base.

End 1st, Rays 1-0: Chris Archer made quick work of the Red Sox in the first inning.

David Ortiz struck out looking to end the inning.

Rubby De La Rosa will be the new Boston pitcher in the second inning. Clay Buchholz, as planned, went just one frame.

Mid 1st, Rays 1-0: Clay Buchholz really needed to work in his one inning. The right-hander gave up one run on three hits and a walk while facing seven Rays hitters.

David DeJesus greeted Buchholz with a line drive over Alex Hassan’s head in right field. The ball kicked up over the fence for a ground-rule double.

It looked like Buchholz might avoid any damage after issuing a one-out walk to James Loney, as the righty struck out Wil Myers. But Matt Joyce knocked in DeJesus with an RBI single into left field.

Logan Forsythe loaded the bases with an infield single. Xander Bogaerts made an excellent diving stop in the hole, but his throw to first base wasn’t in time.

Sean Rodriguez threatened to knock in everyone with a towering fly ball to left field. Jonny Gomes raced back and adventurously battled the sun to record the third out.

1:08 p.m.: Clay Buchholz misses up high with a ball, and we’re underway at JetBlue Park.

11 a.m.: Let’s run down some pregame notes before things get underway at JetBlue Park.

-Jake Peavy will throw long toss Tuesday, according to manager John Farrell. The plan is for Peavy to throw a bullpen session Wednesday.

-Shane Victorino will participate in full baseball activities, including batting practice, Tuesday. There is no exact timetable for Victorino getting into games, but Farrell sounded optimistic about the right fielder’s progress.

-David Ross is dealing with a left foot issue, hence his absence from Tuesday’s lineup. An MRI revealed no structural damage, but the veteran catcher is dealing with some tendon inflammation.

-The Red Sox likely will keep catcher A.J. Pierzynski off his feet for a few days. Pierzynski rolled his ankle in Monday’s spring training game against the Pittsburgh Pirates.

-Matt Barnes is dealing with a sore shoulder, and the Red Sox are being very cautious with him, even though it’s not believed to be a big deal.

Buchholz, who missed three months of the regular season last year before again dealing with physical issues during the postseason, will take the ball to begin the Boston Red Sox’s Grapefruit League game against the Tampa Bay Rays on Tuesday. The Red Sox certainly hope it’s the first step toward Buchholz building up enough strength to remain healthy for the entire season.

Buchholz likely will pitch one inning Tuesday, according to manager John Farrell. The right-hander then will throw another inning in the bullpen as the Red Sox proceed cautiously this spring.

The Red Sox’s lineup for Tuesday’s spring tilt is below.

Here’s a look at the Tampa Bay Rays’ starting lineup. 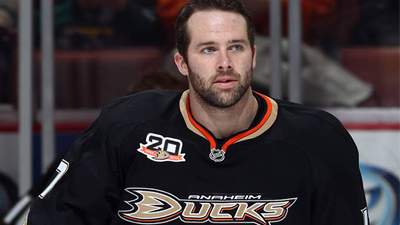 Dustin Penner Traded To Capitals, Tweets That Ducks ‘Used’ Him