BOSTON — David Ortiz has had enough of David Price?s antics.

Price drilled Ortiz with a first-pitch fastball Friday in the first inning of the Boston Red Sox?s 3-2, walk-off win over the Tampa Bay Rays at Fenway Park. It marked the beginning of a wild game, after which Ortiz vented about Price, who also criticized the Red Sox slugger during last year?s ALDS.

“I have a lot of respect for the guy, man. But it’s over. I have no more respect for him,? Ortiz said. ?Last year, we kicked his ass in the playoffs, he went off, talking (expletive) about everybody. ? We got to talk on the phone. We kind of straightened things out. He was kind of upset, you know? Me, as a veteran, I?m going to kind of let him know how things go in this game.

“Later on, he called me and apologized because he knows he was wrong. He apologized in public. He apologized to myself and everything was cool. So first at-bat of the season against me, he drilled me? I mean, it?s a war. It’s on. Next time he hits me, he better bring the gloves. I have no respect for him no more.”

Price, whose displeasure during last season?s ALDS stemmed from a two-homer performance from Ortiz in which the All-Star slugger admired one blast a little too long in the pitcher?s eyes, also plunked Mike Carp in the fourth inning of Friday?s game. Carp started walking toward the mound, resulting in the benches emptying. A visibly upset Ortiz went after Price as pushing and shoving ensued.

“I was going to let him know. I respect everybody in this league and I get a certain respect from everybody,? Ortiz said. ?If you?re mad because I took you deep twice, I?m going to let you know I have almost 500 homers in this league. It?s part of the game, son.

Ortiz might be done. But it remains to be seen whether the fireworks between these two heated rivals is anywhere close to being over.

Aaron Hernandez Reportedly Running Out Of Money To Pay Lawyers 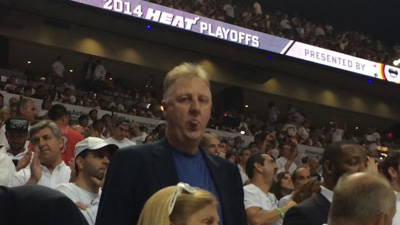