The San Antonio Spurs and the Miami Heat are back in the NBA Finals, facing off in the championship for the second straight year. All the key components are back, from LeBron James and Tim Duncan to Chris Bosh and Tony Parker. (Gary Neal and Mike Miller will be missed, though.)

The Heat’s mission all season has been a three-peat, while the Spurs have been eyeing revenge since their heartbreaking collapse down the stretch in Game 6 last year. There are numerous reasons to believe that this time, things will go differently.

Manu Ginobili has been brilliant in these playoffs. There is no overstating how awful Ginobili looked for most of last year’s Finals. He shot 10-for-29 from the field in the first four games before rebounding with a stellar 24-point, 10-assist performance in Game 5. But it wasn’t so much the numbers as the key mistakes at pivotal moments — precisely the type of moments in which he came up huge for the Spurs in this year’s Western Conference finals. At 36, he’s controlling the game just like he did at 26.

Kawhi Leonard is due to break out. Bit by bit, the third-year forward just keeps improving, although this postseason has been a mixed bag. He was tremendous in San Antonio’s series clincher against Portland, and against Oklahoma City the Spurs fell into a pattern: They won when Leonard played well, and lost when he played poorly. Remember, Leonard was immense in last year’s playoffs, shooting better than 60 percent inside the 3-point arc and grabbing nine rebounds per game. If that guy comes back for the Finals, the Spurs could be unbeatable.

Danny Green is used to this stage now. The Spurs’ young sharpshooter was lights-out from long range in last year’s Finals, nailing 27 of 49 attempts. But he struggled doing anything except catching and shooting, as evidenced by his postseason shooting percentage plummeting from 49 percent outside the arc to 39 percent inside it. He also looked slightly shellshocked in Games 6 and 7, when he went just 2-for-11 from three. Green hasn’t looked overmatched this spring, however, and it’s unlikely he’ll blanch in the same situation this time.

Boris Diaw will be the second-best big on the floor, if he wants to be. The Spurs don’t beat the Thunder if Diaw doesn’t play the way he did in the last three games of the conference finals. Spurs coach Gregg Popovich counteracted Serge Ibaka’s shot-blocking presence by sticking Diaw on the perimeter, and the big Frenchman made the move pay off. Diaw averaged 17.7 points and 6.7 rebounds in Games 4 through 6. Any similar showing in the Finals and the Heat will be scrambling to find big men to defend both Duncan and Diaw.

Dwyane Wade has lost the teeniest of steps. The knees are shot, so it’s remarkable Wade has been able to do what he has. His 18.7 points per game in the playoffs is nearly three points better than last year and one could argue he should take more threes. (He was 6-for-13 from downtown against the Pacers.) The Heat need Wade to be more than just a spot-up shooter to stretch the defense, however, to keep the Spurs from blanketing James.

Shane Battier, Ray Allen are another year older. Veteran role players are vital to any championship run, and Battier and Allen have contributed in their own ways. Although Battier is still a capable defender, at this point in his career, he — like Allen — needs to hit shots to be useful on the court. With Mike Miller gone, it’s imperative for the Heat that these two make Spurs defenders think twice about helping off them in the corner when James drives.

This time, the Spurs will box out Chris Bosh. Never forget that the Heat were one clutch shot by Allen away from losing two of the last three NBA Finals. The Spurs sure haven’t. But Allen’s shot wouldn’t have been possible without Bosh chasing down James’ miss in Game 6, allowed Miami to steal the game and eventually claim the series. If Popovich ever sensed his players nodding off in film sessions, all he had to do was replay those agonizing seconds to jolt them awake. The Spurs remember, and they are back to make amends. 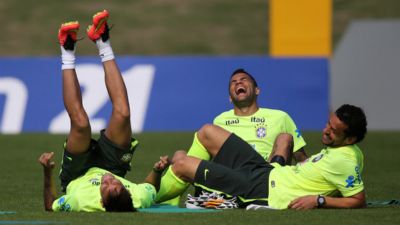