Sam Bennett is an extremely talented hockey player. If he weren’t, NHL Central Scouting wouldn’t have tabbed him as the No. 1 prospect entering the 2014 NHL draft.

Scouts found out this weekend, however, that upper-body strength is not the 17-year-old’s area of expertise.

Bennett, who racked up 36 goals and 55 assists for the OHL’s Kingston Frontenacs this season, failed to complete even one pull-up during testing at the NHL Scouting Combine in Toronto. The young forward told reporters afterward that he was unhappy with his showing but not all that worried about it.

“I was definitely disappointed with myself,” Bennett said, via The Canadian Press. “I was wanting to do the best I can in every test. But, I guess, ultimately games aren’t won or lost if you can do a pull-up in the gym.”

“The fact that he can play the game the way he plays the game, I think the teams feel that he’s a pretty complete package,” Marr said. “This is what the whole combine’s about: The team that’s going to get Sam Bennett knows what work lies ahead and they’ll be able to put him on the proper path for development.”

Here are a few non-pull-up highlights from Bennett’s day at the combine:

The NHL draft will take place June 27 in Philadelphia, with the Florida Panthers owning the top pick. NESN.com’s latest mock draft has the Panthers taking Barrie Colts defenseman Aaron Ekblad first overall, with Bennett going to the Edmonton Oilers at No. 3. 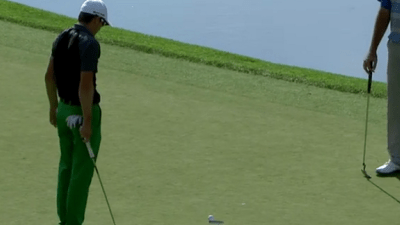 Crazy Putt At Memorial Hangs On Edge For 23 Seconds, Goes In (Video)