The Red Sox don?t really look like a team that?s out of contention. Sure, Boston isn?t going anywhere this season, but there are some nights, like Friday, when the club looks far better than its record indicates.

The Red Sox opened a three-game series against the Los Angeles Angels — a team now 19 games above .500 (67-48) — with a 4-2 win. Boston showed energy, received quality pitching and produced timely hits.

While 2014 looks like a wash, Friday?s victory served as another reminder that the future isn?t all doom and gloom for Boston. The Red Sox still can hang with the best of them amid their tumultuous campaign.

Let?s go over some notes, shall we?

— Allen Webster rebounded from an absolute stinker last Saturday to assemble the best start of his young major league career.

Webster allowed two runs on four hits over 6 2/3 innings. He struck out three, walked two and threw 84 pitches (53 strikes). It marked the first time in 10 career starts that he pitched into the seventh inning.

Most importantly, Webster looked — and felt, according to his postgame comments — like he was pitching with confidence.

— Yoenis Cespedes posted his first two RBIs in a Red Sox uniform. The slugger ripped a two-run double into the left field corner as part of a three-run third inning.

The 3-4-5 trio of David Ortiz, Cespedes and Mike Napoli could become very potent down the stretch. Ortiz went 0-for-4 on Friday, but Napoli launched a solo homer in the fifth inning to extend Boston?s lead.

— Brock Holt is showing signs of breaking out of his offensive slump.

Holt collected two hits and reached base three times, raising his average back to .300. Holt has a hit in three straight games and is hitting .276 (8-for-29) in August after ending July with a 3-for-32 skid.

— Jackie Bradley Jr. hasn?t been able to hit a lick. But one aspect of his season has been very admirable.

Bradley has done a tremendous job of separating offense and defense. All too often, players will sputter at the plate and allow the struggles to spill into other areas of their game. Bradley has done the exact opposite, remaining steady — perhaps even improving — defensively despite his major offensive woes.

Bradley, who is wedged in an 0-for-27 slump, wasn?t in Friday?s starting lineup. He entered as a defensive replacement in the eighth inning, though, and immediately made an impact with his glove.

Bradley made a nice running grab in shallow center field on a blooper in the eighth inning. He then made a spectacular catch in the ninth inning on a ball smoked to the warning track in right-center field.

The ninth-inning grab — Bradley slammed into the wall with a full head of steam after a snow cone catch — was extremely important, as David Freese followed with a double and Chris Iannetta drew a two-out walk before Koji Uehara closed the door.

?One thing that has never been shaken in his time here is his defense,? Red Sox manager John Farrell said. ?He?s a timely defender and you feel like he can roll out of bed and run to a spot where a ball is going to land. Thankfully, he has that instinct. He showed it twice tonight.?

JBJ’s offense is a work in progress. His defense is elite.

— Junichi Tazawa faced a daunting task in the eighth inning, as Trout, Pujols and Josh Hamilton were due up. Taz surrendered a double to Pujols but successfully navigated through the frame.

— It wasn?t a sparkling ninth inning for Uehara, but the Red Sox improved to 39-0 when leading after eight innings.

— Ortiz appeared to shoot a glance toward Angels reliever Jason Grilli following the seventh inning, as the reliever celebrated an inning-ending strikeout with an emphatic fist pump. Nothing came of it.

— Shane Victorino, who underwent successful back surgery Tuesday in California, joined his teammates in the visitors’ clubhouse before the game. He expressed optimism regarding his future. 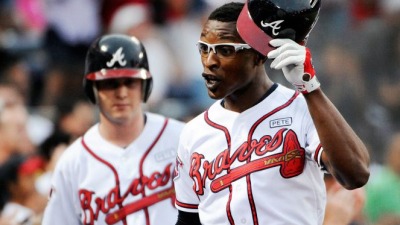