Patriots fans still are clamoring to add another veteran tight end to the 90-man roster, which makes sense. Rob Gronkowski, Michael Hoomanawanui and D.J. Williams are banged up, Steve Maneri lacks experience as a pass-catcher after starting his NFL career as an offensive lineman and rookie Justin Jones already has been waived by the Patriots once. Develin adds a physical presence to the Patriots’ offense, but he’s not exactly the most athletic option as a second tight end. The Patriots are almost teasing their fans by keeping an open spot on their 90-man roster.

Based on the Patriots’ current situation at tight end, fans are questioning why the team hasn’t picked up the phone to call Jermichael Finley or Dustin Keller. Obviously the Patriots aren’t the only team that hasn’t signed the two veteran tight ends, and it’s possible that they’ll be signed after Week 1, so that their contracts won’t be guaranteed for the entire season.

In this week’s mailbag, fans asked what other tight ends are available for the Patriots to sign and about the chances of Tony Gonzalez signing midway through the season. Check out the answers below.

@DougKyedNESN now that the PS is up to 10, who do you have that makes it there?
–@t00bahhero

Based on my 53-man roster projection, here are the 10 best options on the Patriots’ roster for the practice squad:

Finch has shown promise, but he needs more work before contributing during the regular season, especially on punt returns.

Bolden was barely left off my 53-man roster projection. Based on the new practice squad rules, Bolden is eligible, and he could serve as valuable depth at running back.

Boyce has athleticism to spare, but he hasn’t been able to put it all together while he competes in a very competitive group at wide receiver.

Gallon is playing from behind after being injured for most of training camp. His best shot to make the Patriots at this point is through the practice squad.

Jones has been on and off the roster, but he’s a project who’s worth a spot on the practice squad. The 6-foot-8 tight end already has cleared waivers once, so the Patriots should have no problem slipping him onto the scout team.

Devey has the versatility to play tackle or guard, which is valuable on the practice squad.

The Patriots don’t need to give the Green Bay Packers a draft pick for Worthy if he’s waived and gets added to the practice squad. Given his limited time on the Patriots, Worthy doesn’t stand a great chance of making the 53-man roster.

Vellano would provide valuable depth behind a banged up defensive line. He proved in 2013 that he can contribute on an NFL roster.

Beauharnais has struggled so far in the preseason, but he’s flashed just enough promise to keep around on the practice squad.

Wilson was left off my 53-man roster projection because he’s had trouble staying healthy this offseason as he competes for a starting job. Wilson would provide veteran depth on the practice squad, however.

Many of these players would get claimed if waived by the Patriots on Aug. 30, however. So it’s likely that the Patriots’ practice squad is filled with players that clear waivers from other teams.

@DougKyedNESN is there any reason other than owner greed to add 2 practice squad players rather than expanding the rosters to 55?
–@junkfishjordan

It would be too much of a mess from a salary-cap perspective to add two more roster spots in August. This is a best-case scenario for both the owners and NFLPA, since it adds two more jobs without breaking the bank. Players now eligible for the practice squad won’t be complaining on Aug. 31 if they go unclaimed on waivers and get added to a scout team.

@DougKyedNESN If you had to pick one flavor of ice cream for your worst enemy to eat for the rest of their life what would it be?
–@jdafonte127

Whenever my fiancée and I go to Crescent Ridge in Sharon, Mass., we always go through the flavors we would never order.

For your question, it would come down to rum raisin, ginger, frozen pudding and grapenut. All four of those sound disgusting, but I guess I’ll go with rum raisin. Who would order ice cream with raisins in it?

Tom Crabtree and A.C. Leonard are interesting options still out on the open market. Crabtree played with Greg Schiano with the Tampa Bay Buccaneers and could add a veteran savvy to the group.

Leonard’s past could preclude him from being signed. He left the Florida Gators in 2012 after pleading no contest to a charge of misdemeanor battery after an alleged altercation with his girlfriend. Leonard was waived by the Atlanta Falcons on Aug. 7 after signing as an undrafted free agent in May. Leonard could add some athleticism to the position if the Patriots are willing to wager on his rocky past.

@DougKyedNESN Does Mark Henry give Rusev his first loss?
–@Wrencis

I’m going to say no, but I am excited about Henry and The Big Show’s new tag team. The pair is reminiscent of The Natural Disasters from the 1990s.

The Usos better not get too comfortable with those WWE Tag Team Championship belts around their waists. Henry and Big Show are coming for those belts.

@DougKyedNESN any possibility of Tony Gonzalez signing with us?
–@PatriotsFans1

Gonzalez said he would be tempted to sign with a contender if they call him during the regular season. The Patriots likely will be contenders, and they need help at tight end. If Rob Gronkowski suffers another injury, it would be logical for the Patriots to give Gonzalez a call.

@DougKyedNESN Any chance Dobson gets any play in the preseason ?
–@mike_pats712

I think there’s a possibility that we see wide receiver Aaron Dobson during the fourth preseason game against the New York Giants. Dobson hasn’t progressed to 11-on-11 drills yet, though, so even an appearance against the Giants isn’t a sure thing. 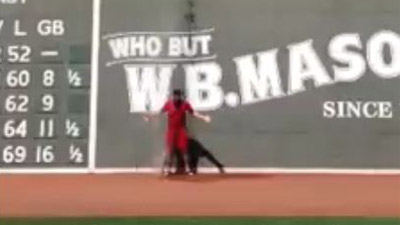 Penn State-UCF Game In Ireland Could Be Threatened By Volcano