This just in: Cristiano Ronaldo is having a good week.

Ronaldo netted penalty kicks in each half, and the towering, 32nd-minute header, which you can see below. Ronaldo rounded out his “poker” (soccer term for a four-goal game) with a routine strike in the 90th minute.

The four goals Ronaldo scored Tuesday, combined with his hat trick against Deportivo La Coruna on Saturday, give him an astounding seven goals in four days.

It’s little wonder why Real Madrid head coach Carlo Ancelotti said he has no intention of resting Ronaldo earlier this week … or why Manchester United fans are drooling at the thought of the Portuguese superstar returning to Old Trafford, as the rumor mill suggests he might. 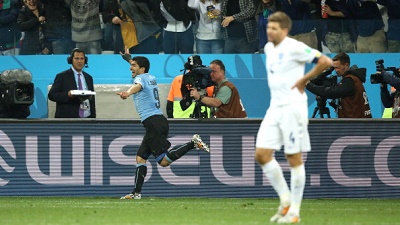 Luis Suarez Also Banned From Playing Until October In ‘FIFA 15’