FOXBORO, Mass. — Boston talk radio won’t have much to whine about this week.

The New England Patriots steamrolled the Cincinnati Bengals as they returned to the friendly confines of Gillette Stadium. The offense clicked, the defense allowed the Patriots to win the time-of-possession battle, special teams made plays and — most importantly — Tom Brady found his smile in the 43-17 win.

Head coach Bill Belichick still will have his coaching points, and the Patriots weren’t able to come out of the game injury- or penalty-free, but at least we won’t have to write and hear about the franchise’s downfall for the next seven days.

Check out the Patriots’ stars of the game in their 43-17 win over the Bengals:

TOM BRADY
Brady was in vintage form, completing 23 of 35 passes for 292 yards with two touchdowns. He was only sacked once and looked much more comfortable in the pocket.

Brady was able to spread the ball around and had time to find his open targets. His extra protection, and better play from his receivers, made a huge difference.

Maybe he’s not so washed up, after all.

ROB GRONKOWSKI
Gronkowski caught six passes for 100 yards and one touchdown, and he nearly looked back to form five games into the season. The big tight end dropped four passes, by my rough count, so it wasn’t perfect, but it certainly was better.

Gronkowski will be a major weapon down the stretch if he’s able to stay healthy.

TIM WRIGHT
Wright had his breakout game in a Patriots uniform, catching five passes for 85 yards and one touchdown. It took Wright five games to get up to speed in the Patriots’ offense, but he could be a serious weapon in a two-tight end scheme.

Gronkowski took half the season to catch on during his rookie year in 2010, so Wright’s slow acclimation is no reason for concern.

STEVAN RIDLEY
Ridley was the bellcow, running for 109 yards on 24 carries for the Patriots, and he picked up his second touchdown of the season. The Patriots, as a whole, rushed for 224 yards on 43 carries.

The Patriots were able to establish the run after they took a 14-0 lead in the first quarter.

KYLE ARRINGTON
Arrington, in a limited role as the slot cornerback, has been one of the Patriots’ most consistent defenders. Arrington was solid in coverage, and he forced a fumble, recovered a Bengals fumble and scored a touchdown.

Arrington forced the turnover on the sideline after Bengals receiver Dane Sanzenbacher caught a short pass. Arrington went for the strip by poking the ball out from behind. Safety Duron Harmon recovered the fumble.

The Patriots’ defense allowed just 79 yards on the ground to the Bengals. 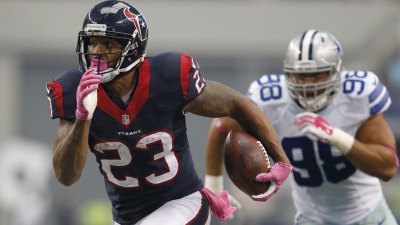