Josh McDaniels didn’t have the weekend off like the rest of the New England Patriots players and coaches.

The Patriots offensive coordinator interviewed for the Atlanta Falcons’ head-coaching vacancy Friday and with the San Francisco 49ers on Saturday. McDaniels, who was the Denver Broncos’ head coach from 2009 to 2010, compiling a 10-17 record, downplayed the interviews.

?They were fine. It?s part of the process,” McDaniels said Monday during a conference call. “Obviously it?s a privilege when anyone wants to speak with you about anything like that. At this point, I?ve moved on and hopefully can help us put together a great plan for our guys heading into this week.?

The Patriots will play the Baltimore Ravens on Saturday at 4:35 p.m. McDaniels wouldn’t be able to accept an NFL head-coaching position until the Patriots are out of the playoffs.

“I just had an initial meeting with them and it hasn?t really gone any further in either direction,” McDaniels said. “So, again, I?m back to focusing on the next task at hand for us, which is the Ravens. I?m sure they?ll do what they need to do on their end. I?m sure those things will take care of themselves in the future.? 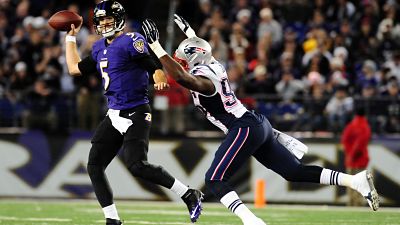