How would the discussion about Tom Brady’s weapons been different if Brandon Marshall was a member of the New England Patriots?

We almost found out prior to the 2014 season, as apparently there were talks between Marshall’s former team, the Chicago Bears, and the Patriots. That’s according to Marshall, who revealed that information Friday in a radio interview.

“I could’ve played for the Patriots last year,” Marshall said on ESPN 1000 in Chicago. “There was an opportunity where (the Bears) could have traded me before the season. My agent and the Chicago Bears — there was a little tension on the contract stuff. I thought I was worth a little more and I ended up settling. There were a couple of teams that were offering more money, but hey, if I went (to New England) there is no telling what could have happened.”

It’s unclear if the Bears and Patriots ever got close to any sort of a trade, and Marshall also added that there was a possibility of a trade “with a couple of teams.”

No trade ever went down — to New England or elsewhere — and Marshall stayed in Chicago for the entire 2014 season. Coincidentally, Marshall was traded to the Patriots’ AFC East rivals, the New York Jets, in March. 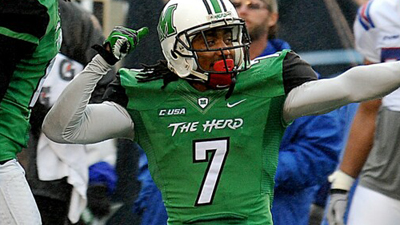