The Patriots embarrassed the Houston Texans 27-0 with rookie Jacoby Brissett at quarterback Thursday night at Gillette Stadium. The nicest thing one could say about the Texans’ offense is they crossed the 50-yard line. And it took them until late in the third quarter to do so.

This Patriots team could be historically good when Brady returns.

Here are the Patriots’ six stars of the game.

LB JAMIE COLLINS
Collins had a huge game on a big, primetime stage, recording 12 tackles and an interception. He allowed four receptions on five targets for 17 yards.

This is the kind of game that will get Collins paid as a free agent this offseason.

QB JACOBY BRISSETT
Brissett didn’t exactly light the world on fire, Jimmy Garoppolo style, but he was solid for a rookie.

He finished with eight carries for 48 yards with a touchdown and went 10 of 18 for 101 yards passing. Most importantly, he protected the football, as the Patriots didn’t turn over the ball once.

PATRIOTS SPECIAL TEAMS
The Patriots forced two fumbles on kick returns and recovered both. Stephen Gostkowski was perfect on field goals and extra points, and Ryan Allen averaged 47.6 yards per punt on seven attempts — six of which were inside the 20-yard line.

This is why the Patriots employ two special teams coaches.

CB MALCOLM BUTLER
Butler covered rookie Will Fuller, who began his career with two 100-yard games, and shut him down. Butler didn’t allow a reception on four targets and made an impressive pass breakup in the fourth quarter.

DE JABAAL SHEARD
Sheard didn’t record a sack in the Patriots’ first two games but made up for it against Brock Osweiler and the Texans. Sheard sacked Osweiler twice for a 21-yard total loss.

RB LeGARRETTE BLOUNT
Blount started out slow but ripped off a 41-yard touchdown run late in the fourth quarter to sufficiently close out the game. Blount has been on a tear early this season. He had two touchdowns Thursday night in a 24-carry, 105-yard performance.

He now has 75 carries for 298 yards with four touchdowns on the season.

CB LOGAN RYAN
Ryan certainly wasn’t perfect, but he had an extremely difficult matchup against DeAndre Hopkins. He allowed four catches on seven targets for 56 yards, which is much better than most cornerbacks fare against Hopkins. 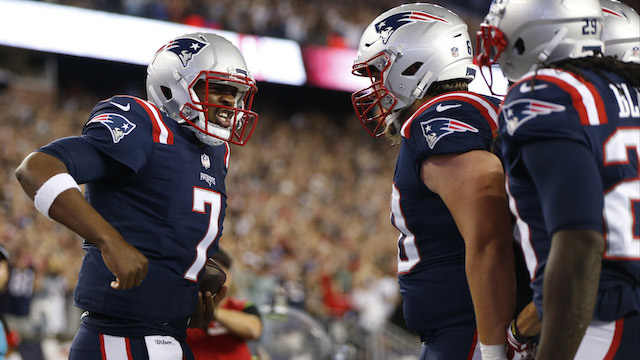