Daniel Cormier vs. Anthony Johnson Round-By-Round Commentary
Result
And still! Cormier defends his UFC light heavyweight title with a submission victory at 3:37 of the second round. The fighters give each other a hug and show a lot of respect to one another following the fight.

Rumble addresses the crowd and announces his retirement. Cormier then grabs the mic and starts shouting at Jon Jones, who is ringside, and challenges him to a rematch.

Second Round
Johnson lands a big takedown midway through the round. But a few seconds later, the two get up and Cormier lands his own monstrous takedown. Cormier is on top of Johnson delivering vicious strikes to the back of his head. Cormier now has Johnson in a chokehold, and the official stops the fight.

First Round
Johnson and Cormier each have their moments, delivering significant strikes. Johnson lands a head kick, which beats up Cormier’s face pretty bad.

Pre-Fight
Johnson enters the octagon with “Moment” by Young Money blasting from the sound system. Cormier is showered with boos as he enters to “Mama Said Knock You Out” by LL Cool J and “Right Above It” by Lil Wayne.

Chris Weidman vs. Gegard Mousasi Round-By-Round Commentary
Result
“Mass confusion” is a perfect way to describe this. The official declares Mousasi the winner via TKO at 3:13 of Round 2 in an extremely controversial decision.

And now they call the fight. What an absolute travesty. Tremendous fight. This is really unfortunate and never should've happened.

This is just another example why ALL states not adopting the same unified rules is just bad for the sport.

Just put them back in the same position and forget it happened.

Instead, Mousasi wins via TKO in the 2nd.

Mousasi told his corner not to celebrate, and Weidman was livid during Mousasi’s post-fight interview with Joe Rogan. Something tells me there will be a rematch after this horrible ending to what could’ve been an amazing fight.

Second Round
Mousasi bounces back strong in the second round, delivering a series of violent combinations on Weidman.

Gegard @mousasi_mma comes out swinging in the 2nd! #UFC210 pic.twitter.com/M7TZZOBzWG

Mousasi delivers knee strikes to Weidman’s head, which the official wrongly stopped after believing they were illegal moves.

Ratner saying the fight should be stopped and there shouldn't be a 5 minute break.

After minutes of “mass confusion,” the officials stop the fight. Because the knees weren’t illegal and Weidman looked disoriented from the knees, the stoppage technically means the official ruled a TKO for Mousasi.

First Round
Mousasi’s prediction that Weidman wouldn’t record a takedown is immediately put to rest as the American does it twice. Mousasi is able to get up both times, however. At the end of the round, Weidman gets yet another takedown to take the round.

Pre-Fight
Mousasi walks into the octagon with a patriotic Armenian tune called “Artsakh” blaring from the speakers here. Weidman enters holding an American flag draped around his shoulders and Tom Petty’s “I Won’t Back Down.”

Gegard @mousasi_mma walking to the #UFC210 Octagon like he's done it 49 or 50 times before! pic.twitter.com/bhAJoJGzkR

Cynthia Calvillo vs. Pearl Gonzalez Round-By-Round Commentary
Result
Calvillo improves to 5-0 in her career — a career that began eight months ago. With two wins in five weeks, she’s one of the fastest-rising stars in the women’s strawweight division. She ends the night by quoting Nate Diaz, saying, “I’m not surprised, (expletives).”

Third Round
Calvillo lands another takedown and tries to choke out Gonzalez with her left arm. Gonzalez does her best to get free, but she finally taps out at 3:45 of Round 3 after spending much of the fight trying to get out of Calvillo’s submission attempts.

How tough is @cyn_calvillo! She stays undefeated at #UFC210 pic.twitter.com/7dOnzoS2AD

Second Round
Gonzalez lands a huge takedown in the middle of the round, but Calvillo easily wiggles herself out from the bottom and goes for several submission attempts. Gonzalez manages to get free a few times, but it’s clear Calvillo won the round and Gonzalez likely will need to finish the fight in the third round if she wants to win her debut.

First Round
The two combatants spend much of the round trading blows while on their feet, before Calvillo gets Gonzalez in a headlock with under a minute left. Calvillo then takes down Gonzalez and attempts to choke her with her legs. Fortunately for Gonzalez, the bell rings just in time, signaling the end of the round.

How close was that?! @cyn_calvillo almost finishes at #UFC210 pic.twitter.com/eW21J9EF3f

Pre-Fight
After a tumultuous day Friday because of controversy over whether or not she could fight with breast implants, Gonzalez enters the UFC octagon for the first time to The Notorious B.I.G.’s “Juicy.” Her opponent, Calvillo, enters with tons of swag and a classic arena jam, “Jump Around” by House of Pain.

For a variety of reasons, Cormier hasn’t defended his title belt since October 2015, when he defeated Alexander Gustafsson at UFC 192. But after some controversy at Friday’s weigh-ins almost jeopardized the title fight, the defending champion will be able to face Anthony Johnson in a UFC 187 rematch.

On the co-main event, Gegard Mousasi and Chris Weidman will battle in what’s sure to be a devastating clash among titans that can have major implications on the hierarchy of the weight class.

And last but not least, the UFC’s overnight sensation, Pearl Gonzalez, will make her debut in the promotion after her breast implants made headlines and almost knocked her off the card. She will fight up-and-comer Cynthia Calvillo, who’s fighting for the second time in five weeks, in a scintillating women’s strawweight showdown.

The main card will kick off at 10 p.m. ET, but fans can enjoy plenty of preliminary fights in the meantime.

We’ll have real-time results for every UFC 210 fight, as well as round-by-round analysis for the main card right here in our live blog, as we’re octagon-side at KeyBank Center in Buffalo, N.Y. You also can watch all the action in a live stream here. 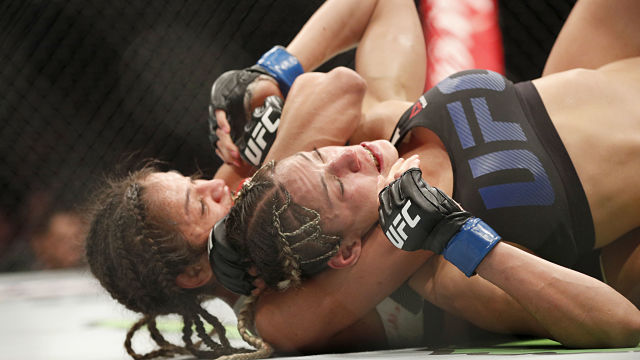 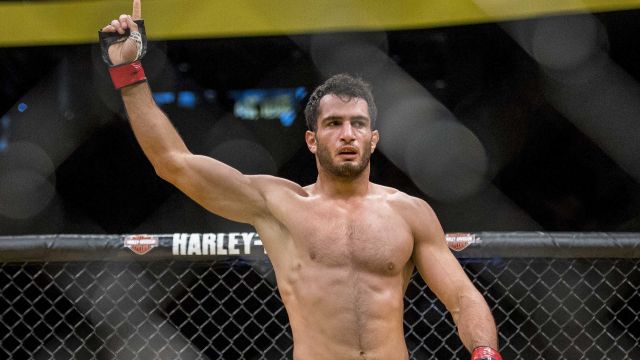