The New England Patriots manhandled the Denver Broncos in their own building on “Sunday Night Football,” cruising to a 41-16 victory at Sports Authority Field.

The win was the 270th of Bill Belichick’s coaching career, tying Tom Landry for third all time.

Next up for the Patriots is a trip to Mexico City to take on the Oakland Raiders.

Fourth quarter, 4:32, Patriots 41-16: Nothing doing again for the Broncos, who went three-and-out.

Tom Brady’s night is over. Brian Hoyer is in at quarterback for the Patriots.

Fourth quarter, 5:17, Patriots 41-16: The Patriots turned the ball over on downs, snapping a streak of seven consecutive drives that resulted in points.

Tom Brady is staying in the game for the time being. No Brian Hoyer yet.

Fourth quarter, 9:04, Patriots 41-16: As good as the Patriots have been on special teams tonight, the Broncos have been equally as horrendous.

Denver was flagged for having 12 men on the field on a Patriots punt, extending a New England drive that culminated in a 6-yard touchdown pass from Tom Brady to James White.

The Broncos now have allowed 92 points in the last two weeks.

Third quarter, 1:35, Patriots 34-16: Demaryius Thomas had a pass bounce off his hands on second-and-10, and tight end Jacob Heuerman picked up just 4 yards on the next play, forcing the Broncos to punt for just the second time tonight.

After the Broncos opened the second half with their first touchdown of the night, the Patriots drove directly down the field for a score of their own.

Tom Brady hit Rob Gronkowski for 26 yards and Brandin Cooks for 25. Then Dion Lewis carried the ball three straight times in the red zone, gaining 6, 8 and 8 yards while dragging Aqib Talib into the end zone on the third carry.

Third quarter, 7:54, Patriots 27-16: The Broncos’ first possession of the second half ended in a much-needed touchdown. Demaryius Thomas beat Stephon Gilmore on a slant route.

Denver’s drive took more than seven minutes off the clock.

Malcolm Butler continues to struggle against Emmanuel Sanders, allowing a 23-yard catch to the speedy wideout. He also was flagged for holding Sanders on Thomas’ touchdown.

Halftime, Patriots 27-9: At long last, Dwayne Allen has his first catch as a Patriot. And it’s a touchdown.

Tom Brady connected with the tight end on an 11-yard scoring strike with 31 seconds remaining in the first half to break this game wide open.

#Patriots score in the final minute of the half in the sixth straight game, and 7th time this season. #NEvsDEN pic.twitter.com/RLpmhy1XNc

Allen is the 68th player to catch a touchdown pass from Brady in the quarterback’s illustrious career.

Trevor Reilly smashed return man Isaiah McKenzie on the ensuing kickoff, and Brock Osweiler took a knee to end the half.

The Patriots announced that special teams captain Matthew Slater is doubtful to return to tonight’s game with a hamstring injury. That’s concerning news for Slater, who missed four games with an injured hamstring earlier this season.

Second quarter, 2:36, Patriots 20-9: Emmanuel Sanders has continued to feast on Malcolm Butler (he has 114 of Brock Osweiler’s 128 passing yards), but the Broncos have yet to find the end zone. Their latest drive ended in another Brandon McManus field goal.

The Patriots running back, who caught a touchdown pass earlier, just blocked a Broncos punt, adding to what already had been an excellent performance by New England’s special teams units.

Score a TD on offense AND block a punt on special teams?@RBrex2022 is doing it all for the @Patriots! #NEvsDEN #GoPats pic.twitter.com/Om8vR6fhOv

The @Patriots special teams is putting on a CLINIC on #SNF pic.twitter.com/QI5M3e8wDX

Oh, and some poor guy on the Denver sideline got smoked in the face by a Brock Osweiler pass.

Brock Osweiler just killed a guy on the sidelines pic.twitter.com/yMytDu0WmV

Second quarter, 13:38, Patriots 17-6: Dwayne Allen doesn’t have a single catch over the first eight-plus games of this season. Martellus Bennett had one on his very first snap.

Tom Brady hit Bennett for a 27-yard gain on his first play since returning to the Patriots, then connected with the big tight end for a 5-yard pickup on his second snap.

Those receptions came during a 14-play drive that stalled just outside the Broncos’ end zone. Tom Brady threw incomplete to Allen on second-and-goal from the 1 — the tight end’s first target since Week 4 — then was sacked by safety Justin Simmons on third down, prompting Bill Belichick to send out the field goal unit.

New England has dealt with some injuries already, as Dion Lewis and Bennett both have been sent to the sideline medical tent. We’ll keep you updated on their status.

First quarter, 5:18, Patriots 14-6: The Patriots need to find a way to cover Emmanuel Sanders. The wideout now has 82 yards on three catches after burning Jonathan Jones on Denver’s latest drive.

A big gain for @ESanders_10 on the slant!

The Broncos also got a 21-yard run from C.J. Anderson but again had to settle for a field goal after stalling in the red zone.

First quarter, 8:24, Patriots 14-3: This already has been a banner night for the Patriots’ special teams.

After McManus put Denver on the board with a field goal, Dion Lewis took the ensuing kickoff back 103 yards for a touchdown.

New England also was excellent in the kicking game two weeks ago against the Chargers.

First quarter, 8:39, Patriots 7-3: Emmanuel Sanders got the better of Malcolm Butler on Denver’s first possession of the night, beating the Patriots cornerbacks for catches of 31 and 13 yards.

The Broncos marched the ball to the Patriots’ 21-yard line before a third-down pass breakup by Stephon Gilmore — who got the start tonight in his first game since Week 5 — forced them to settle for a Brandon McManus field goal.

First quarter, 12:43, Patriots 7-0: Good news for the Broncos: They held the Patriots to 5 yards on their first three plays and forced a Ryan Allen punt.

Burkhead also picked up 10 yards on a screen pass on the play before his touchdown.

First quarter, 15:00, 0-0: The Broncos won the opening coin toss and chose to defer. The Patriots will get the ball first as we get underway in Denver.

8:15 p.m.: With just a few minutes remaining before kickoff, do yourself a favor and check out the video feature ESPN ran this morning on Tom Brady and his biggest fan, a Colorado native named Aaron Cortese who suffers from a rare spine condition known as Chiari malformation.

7:05 p.m.: The Patriots’ inactive list is out, and it includes one fairly large surprise.

Running back Mike Gillislee will be a healthy scratch tonight after gaining just 34 yards on 11 carries two weeks ago against the Los Angeles Chargers.

Gillislee scored three touchdowns in New England’s season opener but hasn’t been particularly productive since, scoring just one touchdown in the last seven games and averaging a mere 3.6 yards per carry.

Defensive end Cassius Marsh also is out with a shoulder injury, leaving the Patriots very thin on the edge. Cornerback Eric Rowe will miss his fifth consecutive game as he continues to recover from a groin injury.

6:55 p.m.: Among those in attendance tonight: former Patriots quarterback Drew Bledsoe, who had a chat with his old backup, Scott Zolak, during pregame warmups.

Drew Bledsoe in the building. @scottzolak has clipboard behind his back pic.twitter.com/UTKLQXdUub

New England signed Jean Francois this week to beef up their D-line depth, which was lacking with Malcom Brown injured. The 30-year-old has played in seven games this season, all with the Green Bay Packers.

1 p.m. ET: The New England Patriots will return to action tonight as they visit the Denver Broncos at Sports Authority Field at Mile High.

New England, which had its bye week last weekend, enters the primetime matchup on a three-game winning streak. Denver, meanwhile, has dropped four in a row, including a 51-23 pounding last Sunday in Philadelphia.

The Patriots will be without wide receiver Chris Hogan, offensive tackle Marcus Cannon and defensive tackle Malcom Brown for the contest, but they should have the services of tight end Martellus Bennett, who reportedly is expected to play after being claimed off waivers from the Green Bay Packers this week.

This story keeps getting more interesting. Source says there is a good chance Martellus Bennett plays tonight for the #Patriots. It?s the expectation. Three days on the roster & now on the field.

Bennett will be a boon in the red zone, where the Patriots have struggled in recent weeks.

Kickoff is set for 8:30 p.m. ET in Denver, but be sure to check back here throughout the afternoon for all your pregame updates. 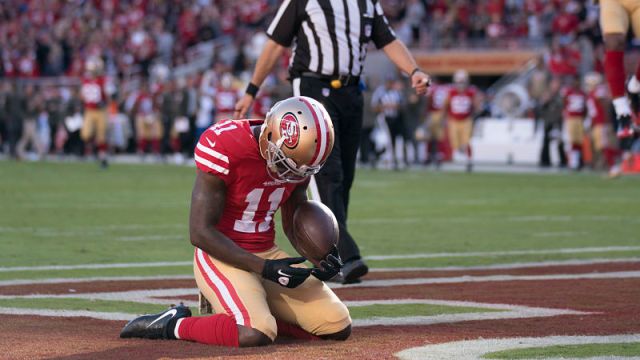 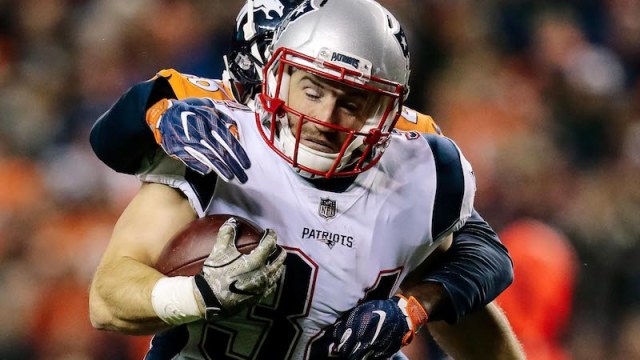