For the first time since their Super Bowl LII loss to the Philadelphia Eagles on Feb. 4, the New England Patriots will take the field as a team Monday as they begin organized team activities.

What exactly are organized team activities — or OTAs, as they’re more commonly known? They’re essentially a scaled-down version of training camp, which does not kick off until late July.

OTAs feature the standard 7-on-7 and 11-on-11 drills, plus individual positional work, but full pads and full contact are prohibited. Players wear helmets, shorts and practice jerseys, making these practices — which are not open to the public — more beneficial for quarterbacks, pass catchers and defensive backs than they are for players in the trenches.

Also, unlike training camp or mandatory minicamp (New England’s is June 5-7 this year), OTAs are voluntary for players. Most do attend, but there are a few players around the NFL each spring who opt to do their own thing until attendance becomes compulsory.

Two very high-profile Patriots could take that path this year. On that note, let’s take a look at the biggest storylines surrounding the Patriots entering Phase 3 of their offseason program.

1. Will Brady and Gronk show up?
Quarterback Tom Brady and tight end Rob Gronkowski — first-team All-Pros in 2017 and arguably the best players in the league at their respective positions — have yet to report to Gillette Stadium for offseason workouts. Both chose to skip Phases 1 and 2 of the program, which focus mostly on conditioning and technique, and neither has said or done anything to suggest he’ll be back on the practice field Monday.

Again, OTAs are voluntary, so players cannot be fined or punished for no-showing. And Brady and Gronkowski are talented and dedicated enough that choosing not to participate in these sessions likely won’t have a negative impact on their play this season. Still, them not joining the rest of the team for OTAs would be a significant story and a departure from the way both have operated in previous offseasons.

UPDATE (May 21, 7:45 a.m. ET): Brady is not expected to attend Monday’s OTA session, according to NFL Media’s Ian Rapoport.

If Brady stays home, Brian Hoyer and seventh-round draft pick Danny Etling would be tasked with running the Patriots’ offense. A Gronkowski absence would put the spotlight on the battle for New England’s No. 2 tight end spot, which is expected to be fierce this summer.

Also worth noting: Since February, the Patriots have added several skill players — wide receivers Jordan Matthews, Cordarrelle Patterson and Braxton Berrios; running backs Sony Michel and Jeremy Hill; tight end Troy Niklas — who have yet to catch a pass or take a handoff from Brady.

2. Which players still are recovering from injuries?
Patriots offensive line coach Dante Scarnecchia revealed earlier this month that tackles Isaiah Wynn, Trent Brown and Marcus Cannon and guard Joe Thuney all will not participate in OTAs and minicamp. Various injuries (shoulders for Wynn and Brown; ankle for Cannon; foot for Thuney) will keep them out until training camp.

Newcomer Matthews, who came over from the Buffalo Bills, also ended last season on IR with a knee injury. Defensive end Adrian Clayborn, another free agent addition, tweaked his quad during workouts, according to ESPN.com’s Mike Reiss, putting his availability for OTAs into question.

3. How will the rookies look?
The Patriots selected nine players in the 2018 NFL Draft and currently have an additional eight undrafted free agents on their roster.

Wynn, their top pick (23rd overall), is expected to compete for the starting left tackle spot vacated by Nate Solder’s departure, but we won’t see him on the field until training camp. The nature of these unpadded practices makes evaluating offensive linemen difficult, anyway.

Given the emphasis OTAs place on the passing game, the rookies we’ll be watching most closely are Michel (31st overall), who is viewed as the potential successor to Dion Lewis; second-round pick Duke Dawson, a candidate for the Patriots’ nickel cornerback role; and sixth-round pick Braxton Berrios, a slot receiver cut from the same cloth as Danny Amendola and Wes Welker.

It also will be interesting to see what Etling has. The LSU product has been working with Brady’s throwing coach, Tom House, this offseason to fix his mechanics, and he’ll get plenty of reps if Brady sits out.

4. What are the positional battles to watch?
We already mentioned tight end, which will feature Dwayne Allen, Jacob Hollister, Will Tye, Niklas, Izzo and Wimann fighting for what likely will be two roster spots behind Gronkowski.

There’s also cornerback (will Eric Rowe keep his spot as the third corner, or will that go to Dawson, one of the Joneses, Ryan Lewis or Jomal Wiltz?), linebacker (Bentley vs. Sam vs. Elandon Roberts), wide receiver (11 guys for probably six spots, with Edelman, Chris Hogan and Matthew Slater as the only locks), running back (Hill vs. Mike Gillislee) and, of course, left tackle, though that one won’t begin in earnest until Wynn and Brown are healthy. 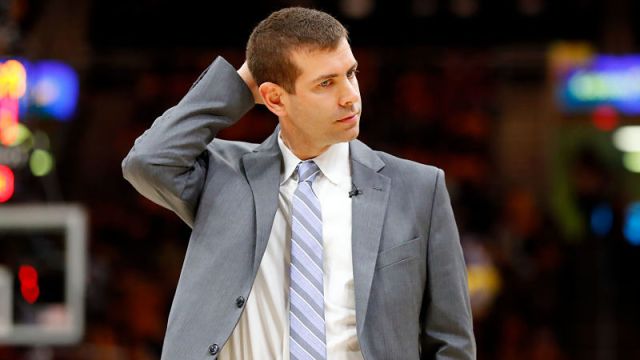 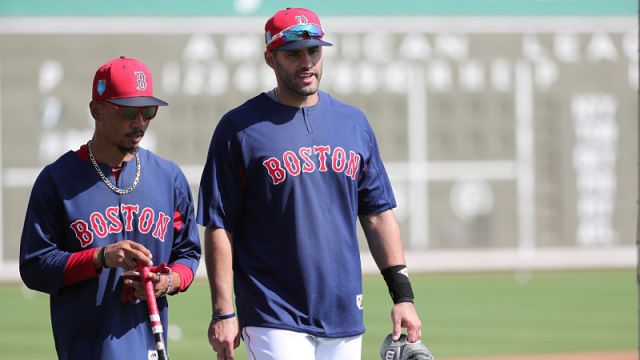 How J.D. Martinez Stopped Mookie Betts From ‘Freaking Out’ About Homer ‘Drought’