Final, Patriots 38-7: That will do it from Gillette Stadium, where the New England Patriots snapped their two-game losing streak in emphatic fashion Sunday, manhandling the formerly undefeated Miami Dolphins 38-7.

Rookie running back Sony Michel enjoyed a breakout game with 112 yards and a touchdown on 25 carries while backfield mate James White racked up 112 yards from scrimmage on 16 touches and scored twice.

New England’s defense imposed its will on Miami, holding Ryan Tannehill and the visitors to 172 yards of total offense — 75 of which came on a garbage-time touchdown drive.

The Patriots won’t have much time to relish this win, though. They’ll be back at it Thursday night when the Indianapolis Colts visit Gillette.

Fourth quarter, 2:42, Patriots 38-7: Frank Gore wriggled his way out of a Devin McCourty tackle attempt to score a 6-yard touchdown and spoil the Patriots’ shutout bid.

The Pats surely are more concerned, however, with the status of defensive tackle Adam Butler and linebacker Elandon Roberts, both of whom left the game with apparent injuries during the drive.

Brian Hoyer has checked in at quarterback for the Patriots, meaning Tom Brady’s day is over.

Fourth quarter, 9:30, Patriots 38-0: As dominant as the Patriots’ offense has been today, Tom Brady has thrown a few ugly passes. He just tossed his second interception, with rookie Minkah Fitzpatrick stepping in front of a throw intended for Phillip Dorsett.

Speaking of quarterbacks, Brock Osweiler has checked into the game for Miami. Ryan Tannehill finished with an even 100 passing yards in what easily was his worst outing of the season.

Fourth quarter, 11:39, Patriots 38-0: Another Dolphins three-and-out, this one featuring nice tackle by Jonathan Jones on a screen pass and John Simon’s first sack in a Patriots uniform. This has been a statement game for New England’s defense, which has dominated in every facet.

Kenjon Barner now is into the game at running back for the Patriots.

Fourth quarter, 13:43, Patriots 38-0: Sony Michel has his first NFL touchdown, scampering into the end zone from 10 yards out to cap another Patriots scoring drive.

Michel now is up to 112 yards on 25 carries. It’s safe to say he’s settling in nicely after a rough couple of games.

Third quarter, 5:13, Patriots 31-0: The Patriots continue to pound away on the Dolphins’ defense. Their latest drive was a nine-play, 59-yarder that culminated in a 14-yard touchdown pass to James White — White’s second score of the game.

New England even got tricky during the drive, having Brady line up in the slot on one play before throwing a pass to White.

Tom Brady also completed a 20-yard pass to Phillip Dorsett and a 9-yarder to Rob Gronkowski on third-and-7. Gronkowski left the field after that reception, however, and now is considered questionable to return with an ankle injury.

Given the score, it might be in the Patriots’ best interest to sit their star tight end for the remainder of the game.

Third quarter, 11:50, Patriots 24-0: No second-half letdown from the Patriots’ defense, which forced another Dolphins three-and-out. Adam Butler brought down Ryan Tannehill on third-and-12 for New England’s first sack of the afternoon.

Third quarter, 14:06, Patriots 24-0: The Patriots opened the second half with a three-and-out, with Phillip Dorsett unable to haul in what would have been a 50-yard pass on third down.

Halftime, Patriots 24-0: The Patriots converted two third-and-7s and a third-and-11 on their final possession of the first half, which Tom Brady capped with a 9-yard touchdown pass to Phillip Dorsett.

Sony Michel, who ripped off a 23-yard run during the drive, has been the star of the game so far for the Patriots’ offense. He’s up to 80 yards on 15 carries, while Dorsett, Cordarrelle Patterson and James White all have found the end zone for New England.

The defense, meanwhile, has dominated, holding the Dolphins to 75 yards of total offense in the first half.

Second quarter, 6:00, Patriots 17-0: The Dolphins went backward on their first drive following White’s touchdown thanks to an unsportsmanlike conduct penalty on lineman Laremy Tunsil. The Patriots now will look to add to their lead before halftime.

White used some fancy footwork to evade some Miami defenders, and Josh Gordon delivered a key block on Xavien Howard to help spring him for six.

Second quarter, 7:41, Patriots 10-0: A trifecta of Patriots penalties on one play (hold by Trent Brown, hold by Chris Hogan, trip by Shaq Mason) dug New England a hole it couldn’t climb out of. After picking up 13 yards on third-and-15, the Pats punted.

Second quarter, 10:47, Patriots 10-0: The Dolphins picked up a quick first down on Stephon Gilmore’s pass interference penalty but were forced to punt three plays later.

Kyle Van Noy, who has been a force in this first half, got his hand in Ryan Tannehill’s face on third down to help force an incompletion to Kenny Stills.

Second quarter, 12:01, Patriots 10-0: After forcing a three-and-out on defense and benefiting from a nice 24-yard punt return by Cyrus Jones, the Patriots used a big play to score the first touchdown of the afternoon.

On third-and-6 from his own 45, Tom Brady found a wide-open Cordarrelle Patterson deep down the field. Patterson, whom Miami had neglected to cover as he tore downfield on a wheel route, caught the ball around the 33-yard line and did the rest of the work himself, evaded one defender as he galloped into the end zone for his first touchdown as a Patriot.

Josh Gordon helped set up the score by drawing an illegal contact penalty on Xavien Howard on third down earlier in the drive. It was Howard’s second drive-extending penalty of the afternoon.

Brady, who absorbed a big hit from Robert Quinn as he released the ball, was trying to hit Phillip Dorsett on a deep curl but had his pass picked off by cornerback Bobby McCain.

It was Brady’s second interception in two games, both of which came on passes intended for Dorsett.

First quarter, 3:27, Patriots 3-0: The Dolphins also were bailed out by a defensive holding call on third down (Jonathan Jones on old friend Danny Amendola), but they were unable to capitalize.

Linebackers Elandon Roberts (pass breakup), Dont’a Hightower (run stuff) and Kyle Van Noy (QB hit to help force an incompletion on third down) all made standout plays as the Patriots forced the Dolphins to punt for the second time today.

Patriots defenders talked this week about playing better on first and second down to give themselves a better chance on third. Miami's three third downs so far have been third-and-12 and two third-and-10s.

First quarter, 5:28, Patriots 3-0: A defensive holding penalty on cornerback Xavien Howard allowed the Patriots to avoid another game-opening three-and-out, and the best running we’ve seen all season from Sony Michel brought them deep into Dolphins territory.

Michel, who struggled to find much traction during his first two games, ripped off runs of 9, 13 and 14 yards on consecutive snaps after Howard’s penalty. Newcomer Josh Gordon then proceeded to pick up 13 yards on a slant route on third-and-6 for his first catch in a Patriots uniform.

.@Josh_GordonXII's first catch with the @Patriots!

Gordon’s grab gave the Patriots the ball at Miami’s 3-yard line, but they were unable to punch it in, instead settling for a chip-shot field goal by Stephen Gostkowski after Tom Brady’s slant to Cordarrelle Patterson on third-and-goal fell incomplete.

Still, some positive signs here for this Patriots offense.

First quarter, 12:05, 0-0: Positive start for the Patriots defense, which allowed a 22-yard pass play on Miami’s first snap but buckled down after that.

Defensive tackle Malcom Brown, who struggled last week against the Lions, made a big play on second-and-7, tackling running back Kenyan Drake in the hole and drawing a holding penalty in the process. The Dolphins punted after a screen pass to Albert Wilson on third-and-12 picked up just 5.

First quarter, 15:00, 0-0: The Patriots won the opening coin toss and chose to defer. It’ll be Dolphins ball to get things started here on a perfect day for football in Foxboro.

12:18 p.m.: Patrick Chung, now back after his concussion-induced absence, is returning punts in warmups along with Cyrus Jones and Kenjon Barner. Cordarrelle Patterson and Sony Michel are handling kick return duties.

Gordon, who was limited in practice this week with a hamstring injury, likely will play a limited number of snaps for the Patriots, but he’ll command attention every time he’s on the field. We could see him matched up against Dolphins star cornerback Xavien Howard, who picked off Tom Brady twice in these teams’ most recent meeting.

— Defensive end Trey Flowers and safety Patrick Chung both are active after sitting out last week with concussions — a big boost for the Patriots’ struggling D.

— Newly acquired defensive end John Simon is active. He was a solid player for the Indianapolis Colts last season and should help the Patriots shore up their edge defense. Second-year pros Keionta Davis and Derek Rivers both are healthy scratches.

— In a surprise move, offensive lineman Brian Schwenke gets the nod over Ted Karras. This will be Schwenke’s first regular-season game with the Pats.

— Headlining the Dolphins’ inactive list is Pro Bowl safety Reshad Jones, who likely would have played a key role in defending Gronkowski.

11:27 a.m.: Ex-Patriots Brandon Bolden and Danny Amendola are back in Foxboro today as members of the Dolphins. Both were received warmly by their former teammates during pregaSecond quarter, 7:29, Patriots 17-0: me warmups.

Big hugs for Brandon Bolden, who was always one of the most popular guys when was here. pic.twitter.com/ARHUihVQNV

8 a.m. ET: Good morning from Gillette Stadium, where the 1-2 New England Patriots are preparing to take on the 3-0 Miami Dolphins.

Miami has not won in Foxboro since 2008. New England, which is coming off back-to-back losses to the Jacksonville Jaguars and Detroit Lions, has not lost three straight since 2002. The Pats hope to extend both of those droughts this afternoon.

NFL Media’s Ian Rapoport reported there is a “good chance” Gordon plays today. Inactives will be announced at 11:30 a.m. ET.

The #Patriots, who traded for Josh Gordon (hamstring) a week ago, may see the debut of their talented WR today vs the #Dolphins. There is a ?good chance? he plays today, source said, provided a pre-game workout goes well and Bill Belichick decides he?s ready.

The Patriots placed running back Rex Burkhead and linebacker Ja’Whaun Bentley on injured reserve this week, solidifying rookie Sony Michel’s status as the team’s lead back. Offensive coordinator Josh McDaniels has tried hard to get the first-round draft pick going since Michel made his NFL debut two weeks ago, handing him the ball on two-thirds of his offensive snaps.

Kickoff is set for 1 p.m. ET, but be sure to check back throughout the morning for full pregame coverage. 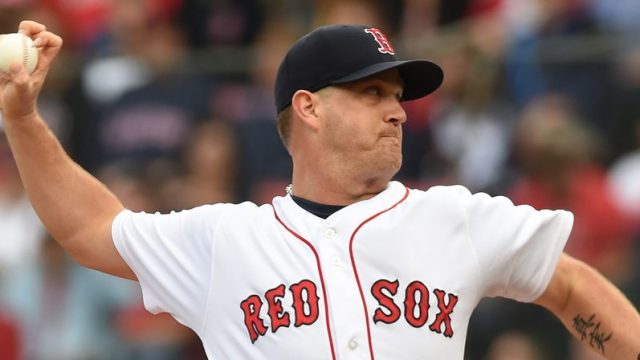 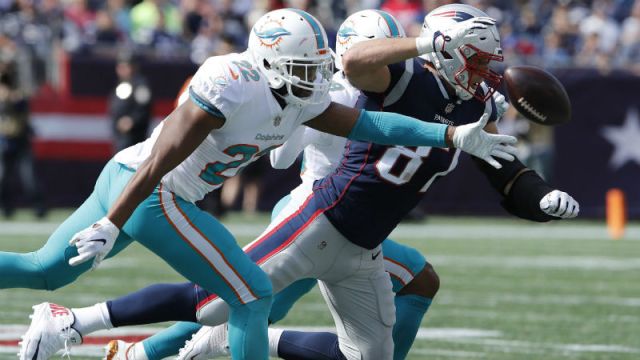