FOXBORO, Mass. — Much has been written over the past few years about the reportedly strained relationship between Bill Belichick and Tom Brady.

But after Brady became the third quarterback in NFL history to join the 500-touchdown club, Belichick had nothing but the highest of high praise for his franchise quarterback.

“It’s tremendous,” the New England Patriots head coach said after his team’s 38-24 win over the Indianapolis Colts on Thursday night. “That’s a lot of touchdown passes to a lot of different guys, too. There’s no quarterback I’d rather have than Tom Brady. He does a great job week-in and week-out, year-in and year-out, all of the situations. He does a great job.”

Brady threw three touchdown passes in the game, connecting with running back James White and wide receivers Cordarrelle Patterson and Josh Gordon. Gordon was the 71st different player to catch a touchdown pass from Brady in his NFL career, breaking the league record of 70 set by Vinny Testaverde.

Asked about his two milestones, Brady referred to both as “team awards.”

“I think all these things like that, milestones and so forth, there are so many people that contribute,” he said. “I just think of all the people that have really worked hard. You know, a quarterback doesn?t throw them to himself. He needs people to catch them and block and defenses make plays and coaches to coach. These are all great team awards. So, pretty cool.”

“There’s a lot of people who have meant a lot to this organization,” Belichick said, praising Vinatieri’s contributions to New England’s first three championship teams. “But certainly nobody more than Tom Brady. 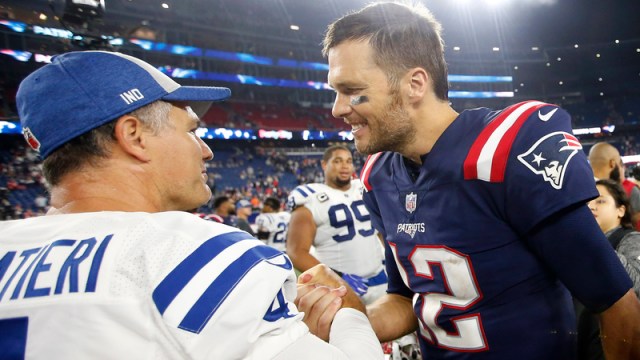