No one has played more games between the pipes in a Boston Bruins sweater than Tuukka Rask.

Rask’s franchise-leading 469th appearance in the Black and Gold is sure to be one that he will not soon forget, as he swatted away 36 shots in the Bruins’ 4-2 win over the Chicago Blackhawks in the 2019 Winter Classic at Notre Dame Stadium.

Bruins coach Bruce Cassidy waited until New Year’s Eve to announce that Rask would be making his second Winter Classic start, and the 31-year-old did all he could to make that decision look like a smart one.

“I was seeing the puck well today,” Rask told NBC’s Pierre McGuire during the network’s postgame coverage. “It’s a different preparation for the game, so you just go out there and try to have fun and it seemed to work today.”

Rask came up big on several occasions against a Blackhawks team that is toward the bottom of the standings but has a potent attack with prolific playmakers.

In the closing seconds of the first period, Rask came up with his biggest save of the game, stoning Patrick Kane on a breakaway opportunity.

“He’s a big piece of our team, he’s our rock back there. He makes the big saves,” said Patrice Bergeron on NHL Network’s postgame coverage. “We believe in him and that’s all that matters and right now, he showed it again on the big stage that he is our goalie.”

Backup netminder Jaroslav Halak leads the Bruins with 21 games played this season to Rask’s 19, but Rask has a .958 save percentage in his last two starts, stringing together back-to-back wins to move his record to 9-8-2 on the campaign. Meanwhile, the Bruins have jumped ahead of the Buffalo Sabres and into third place in the Atlantic Division at 22-14-4.

“We have had the injury bug bothering us for the most of the season,” Rask told McGuire on NBC. “But guys have battled it out and tried to step up and get some points up. I feel like we’re almost there, we just have to grind it out. Our division is very tough, we’re going to be in a dogfight.”

Rask now is just four wins behind Cecil “Tiny” Thompson for the franchise lead in wins.

Here are some other notes from Tuesday’s Bruins-Blackhawks game:

— The Bruins’ third line of Joakim Nordstrom, Chris Wagner and Sean Kuraly shined under the bright lights of Notre Dame Stadium, putting together a beautiful shift in the offensive zone to create the game-winning goal. Kuraly netted his second consecutive game-winner after scoring in overtime against the Buffalo Sabres on Sunday, cleaning up a loose puck in front of the net and slamming it home on his backhand.

The sequence began with Wagner laying a big hit along the boards as the Bruins were able to keep possession in their offensive zone.

“Obviously, a couple good plays by the linemates. They were forechecking hard,” Kuraly told McGuire, as seen on NBC’s postgame coverage. “When we’re forechecking like that, it’s not fun to play against, and tonight I was on the lucky side of that one.”

Cassidy went to the third line often, and the decision paid dividends. Wagner logged 15:44 of ice time and finished with seven hits, while also assisting on Kuraly’s winner. Nordstrom logged 13:14. All three also played a hand in shutting down the Blackhawks’ power play, which went 0-for-4.

“I think it’s huge,” Kuraly said of Cassidy’s confidence in the group. “I think we compliment each other. We know the game that we want to play and we have kind of agreed on it and it seems to work.”

—  David Pastrnak notched a goal and an assist, putting him at 50 points on the season. He is the sixth Bruins to reach the 50-point mark in 40 or fewer games.

With two points in the #WinterClassic, @pastrnak96 (1-1?2) became the sixth @NHLBruins player since 1984-85 to require 40 or fewer games to reach the 50-point mark in a season. #NHLStats pic.twitter.com/oEnUklene1

— Tuesday’s attendance was 76,126, making it the second-highest attended NHL game.

A sellout crowd of 76,126 fans are attending the 2019 #WinterClassic, the second-highest ever at an NHL game. 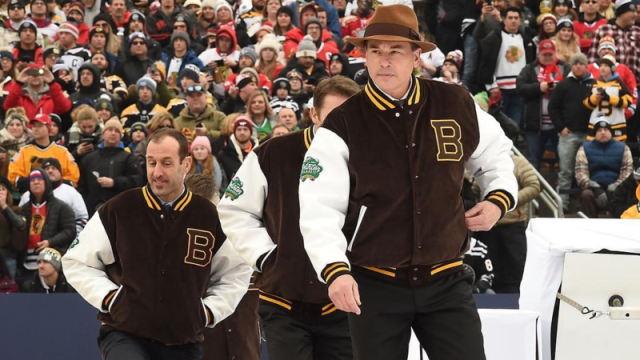