Those were Jamie Collins’ first words to the assembled media Thursday after his third practice back in a New England Patriots uniform.

Collins, a 2013 Patriots draft pick who won a Super Bowl and earned Pro Bowl and second-team All-Pro honors during his first stint with the team, re-signed with New England earlier this month following an inauspicious two-and-a-half-season stay with the Cleveland Browns.

The Browns, who acquired Collins from the Patriots in a shocking trade on Halloween 2016, released the veteran linebacker in March with two years remaining on his four-year, $50 million contract. After languishing on the free agent market for two months, Collins received an offer from the Patriots and decided to return to his first NFL home.

“I was surprised (the Patriots called),” Collins said. “But then again, I wasn?t, because I?m just a free agent, so obviously a lot of teams are going to contact you or whatever. That?s just the business of the game. I?m always surprised no matter what. I?m surprised right now just being in the position.”

Following Collins’ departure from Foxboro, rumors swirled of his “freelancing” on defense drawing the ire of New England coaches. Asked whether his relationship with the Patriots was strained during his final days with the team, Collins said he’s moved on and is focused on the present.

“It was just a change of destination, man,” he said. “I?m a professional and just have to be professional about the business. Business is business. You can?t get upset or do this or do that. I just tried to pick up where I left and move on. Take it to the next space no matter where it?s at.”

He added: “I don?t live in the past. I keep pushing to do my thing and keep going.”

Collins said his familiarity with the Patriots’ system was a “big factor” in his choice to return. He also noted multiple times that signing with New England was the best decision for his family.

“I mean, I started here,” the 29-year-old said. “I had the opportunity to come out and start my career here. Obviously, yes, that played a big factor. Like I said, whatever the opportunity is, presents itself, it?s not just me. I?ve got other people to think about. It?s a team thing.”

Many of Collins’ former teammates have moved on from New England, but several key players remain, including fellow linebacker Dont’a Hightower, whom Collins called “my big bro.” Ex-Patriots linebacker Jerod Mayo also is back in the building this season as the team’s inside linebackers coach.

“It?s even more fun with that guy being our coach,” said Collins, who played alongside Mayo from 2013 until the latter’s retirement after the 2015 season.

Collins is wearing the very un-linebacker-like No. 8 during spring practice. His No. 91 is taken by defensive end Deatrich Wise, so he opted to temporarily sport his old college jersey number until a more suitable option becomes available this summer.

It remains unclear exactly how Collins will fit into a Patriots defense that returns its entire linebacker group from last season, but he primarily played outside ‘backer on Day 3 of organized team activities, rushing the passer on some reps and dropping into coverage on others.

Collins appeared in all 16 games for the Browns last season, playing 90.7 percent of defensive snaps and tallying 104 tackles, four sacks, 13 tackles for loss and one interception.

?It?s another day on the job, man,” Collins said. “Just come out here and do what I get paid to do, and that?s play football, and just do it to the best of my ability.? 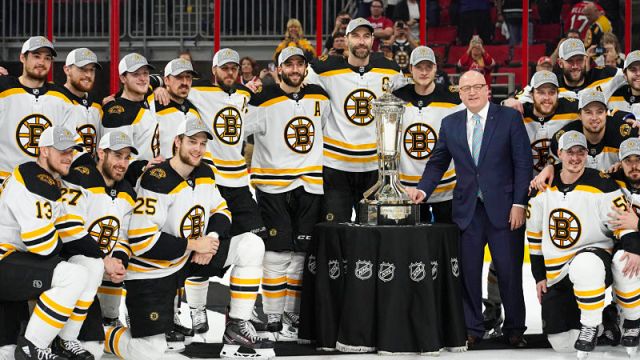