Final, 2-1 USA: The referee blows the final whistle, and USA is heading to the World Cup semifinals after topping France.

USA-France lived up to its billing as the marquee game of the tournament, and Megan Rapinoe rose to the occasion with eyes of the world focused on her due to this week’s spat with Donald Trump. Rapinoe scored in each half to reward USA for the narrow edge maintained on balance of play.

France matched USA’s technical ability in most departments, but Rapinoe’s finishing, combined with USA’s tactical, physical and mental strength was enough to book a place in the semifinals.

Player of the game: Who else could it have been but Rapinoe? She scored twice, leading USA’s charge past France.

Our pink-haired rockstar we stan.

Next Up: USA will face England on Tuesday afternoon in the World Cup semifinals. It should feel at home in that stage of the tournament.

That bracket is filling up fast. #FIFAWWC pic.twitter.com/6DjObkOAPL

#USWNT is the only team to reach all eight #FIFAWWC semifinals.

Meanwhile, France extends the Women’s World Cup hosts’ curse and must qualify for the 2020 Olympics.

Every non-U.S. host of the #FIFAWWC has gone out in the quarterfinals:

?? France does not qualify for the 2020 Olympics

?? Great Britain has qualified for the 2020 Olympics (via England's result)

90th minute, 2-1 USA: There will be five minutes of stoppage time in the second half.

Stop us if you've heard this before. Renard with the header off a set piece. France are back in it. #FIFAWWC pic.twitter.com/DGdOzfDNLZ

It’s Renard’s fourth goal of World Cup 2019, and all have come from headers off set pieces.

78th minute, 2-0 USA: Parc des Princes is packed, and the atmosphere has been electric for much of the contest.

We've heard every one of them in here tonight, too! #FRAUSA ???? pic.twitter.com/otNX3swY8w

73rd minute, 2-0 USA: Tobin Heath looks like she has scored USA’s third, but the referee’s assistant rules the play offside. Crystal Dunn might have been a few inches past the last France defender as Alex Morgan set her up with a delightful through-ball.

Heath puts in the USWNT's third goal of the night, but Dunn is judged to be offside… #FIFAWWC pic.twitter.com/KbXwe6QvPl

Tobin Heath set up the goal with a cut-back pass, and Rapinoe ran onto it and finished with authority.

Megan Rapinoe is the first player to score four consecutive #FIFAWWC goals for the #USWNT. ??

64th minute, 1-0 USA: France’s Valerie Gauvin heads a shot weakly on goal, but USA goalkeeper Alyssa Naeher still has to dive to save it.

Kelly O’Hara also needs treatment after taking a powerful shot to the body.

58th minute, 1-0: It’s another good scoring chance for France, as Eugenie Le Sommer collects a cross and shoots into the side netting from a tight angle.

46th minute, 1-0 USA: Samantha Mewis draws a save from France goalkeeper Sarah Bouhaddi, as USA looks to strike early in another period.

Another fast start for the USA!

Mewis forces a good save from Bouhaddi, who then kicks away the follow-up attempt from Heath. #FIFAWWC pic.twitter.com/UYtAfC5AhM

Halftime, 1-0 USA: That’s the end of the first half. USA leads by one.

This quarterfinal started with a bang but settled into an uneventful procession of play after around 20 minutes. Megan Rapinoe’s goal represents the difference in scoreline, leaving USA to benefit from some good fortune. After all, few expected her to score directly from that kick from a tight angle, but the fact no players among sea of USA and France bodies touched disrupted its path left France goalkeeper Sarah Bouhaddi helpless to stop it.

France looked like it might seize the initiative shortly after Rapinoe’s goal, but the hosts seem to suffer amid the heat and humidity.

History suggests USA is en route to a semifinal date with England, but the players still have a job to finish.

?? France has lost all four WWC games when trailing at half.

45th minute, 1-0 USA: There will be two minutes of stoppage time in the first half.

38th minute, 1-0 USA: Kelley O’Hara crunches France’s Amel Majri and avoids a yellow card that would rule her out of the semifinals, should USA advance.

30th minute, 1-0 USA: The balance of play remains more-or-less even as the teams take a short water break. France is in the midst of a heat wave this week, and temperatures were around 86 degrees at kickoff.

France largely has ceded possession and territory to USA in recent minutes, but its tight defense has prevented the Americans from creating many meaningful chances on goal.

Alex Morgan also is receiving some treatment on the field. She exited USA’s third group-stage game (the 2-0 win over Sweden) due to a reported knee problem. She the factored little in USA’s win over Spain in the Round of 16.

18th minute, 1-0 USA: The action is swinging from end to end, as the teams push each other for the next goal, which will play a big part in determining how this fascinating contest unfolds.

'5 – GOAL!@mPinoe puts the USA on the board EARLY!

It came from a free kick off to the side of France’s penalty area. Rapinoe hit the free kick into traffic, France’s Amandine Henry and USA’s Julie Ertz failed to redirect it, and the ball skipped past goalkeeper Sarah Bouhaddi.

DREAM START FOR THE USA! ??@mpinoe's free kick gets past everyone as the @USWNT takes an early lead once again! #FIFAWWC pic.twitter.com/K5oHYnCyvD

It’s another early goal for USA, and France now trails for the first time in this World Cup on home soil.

The goal is Rapinoe’s fourth of World Cup 2019, and she has been on fire in the knockout rounds.

The holders with the perfect start in #FIFAWWC #FRAUSA pic.twitter.com/cbTFTACKGq

USA has tried to pressure opponents and score early during its World Cup journey so far, often with great effect.

Kickoff: USA versus France is underway.

Now France’s will ring out at Parc des Princes.

Here are the starting lineups.

USA names an unchanged lineup from the team that beat Spain on Monday in the Round of 16. That means Lindsey Horan starts on the substitutes’ bench again, and leaving Samantha Mewis and Rose Lavelle to provide structure and dictate tempo in midfield.

Team USA will face France on Friday in Paris at Parc des Princes in the 2019 FIFA Women’s World Cup quarterfinals. The mega-showdown pits the reigning world champion and top-ranked team against the World Cup host nation, which is ranked fourth in FIFA’s most recent pecking order.

1 – Tonight's Women's World Cup quarter-final between France and USA will be the first ever meeting between the hosts and the holders of the tournament. Clash. #FIFAWWC #FRAUSA #FRA #USA pic.twitter.com/u91BiiXYSn

“I think this is the game that everyone had circled,” Rapinoe said Monday, per The Associated Press. “I think it?s going to be a great match. I hope it?s wild and crazy, I hope the fans are crazy and there?s tons of media around it and it?s just a big spectacle. I think this is incredible for the women?s game, when you have two heavy hitters meeting in the final knockout round.”

The USA-France winner will face England on Tuesday afternoon in the World Cup semifinals.

Stay right here for all the action from Parc des Princes. 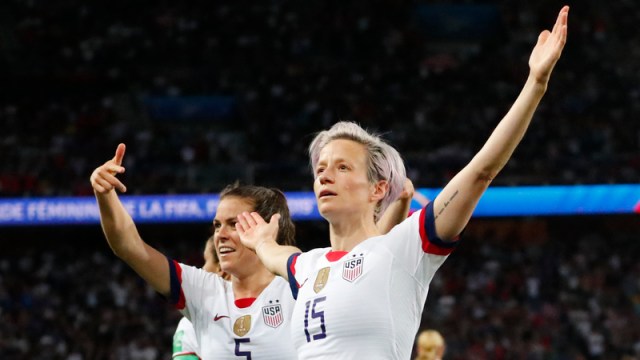 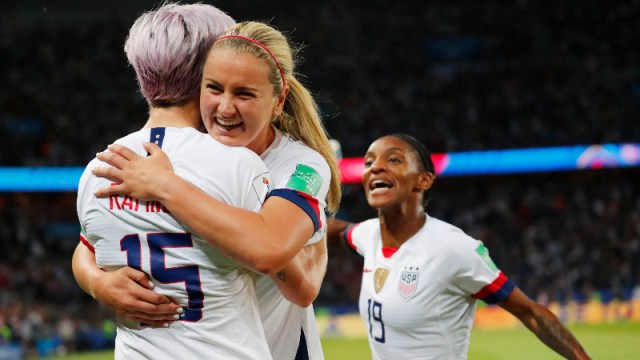