What To Make Of Patriots' Feelings About Backup QB Jarrett Stidham - NESN.com Skip to content

Completely unrelated to everything that was going on with New England Patriots quarterback Tom Brady last Thursday, we asked a source how the team feels about 2019 fourth-round pick Jarrett Stidham.

The source said the Patriots love him. In fact, they like him as much as a team can after Year 1. It’s high praise.

We heard from another source that Stidham, as a rookie, certainly wasn’t on the level of Jimmy Garoppolo by Year 4. That’s obviously not a surprise, but it also gives a current ceiling to Stidham’s passing prowess. It’s not a slight on Stidham. Garoppolo was a starting quarterback by Year 4, Stidham is entering his second season. He’s not going to be as precise.

“Jarrett is a smart kid,” Belichick said. “He picks things up very quickly. He has a good grasp of the offense given where he is in his career. He?s handled everything we?ve thrown at him. In practice, he does a good job. He gets a lot of passes on our defense and when he has the opportunity to get the offensive snaps, he?s prepared and does a good job of those. But you know, it?s always different in the game. I think he?s doing all he can do.”

It was a good sign last season that Stidham beat out Brian Hoyer for the team’s backup quarterback job. And he kept it all season even after the Patriots signed veteran backup Cody Kessler.

He led qualified quarterback in Pro Football Focus’ QB rating metric. He was second in PFF’s accuracy rate, sixth in deep passing accuracy and 12th in accuracy under pressure.

Now, Stidham’s preseason stats are a small sample size. And his regular-season numbers are even tinier. But the Patriots like him, and that’s really all that matters.

That’s not to say Stidham can replace Tom Brady in 2020 if the legendary quarterback leaves in free agency. But it’s a tall task for anyone coming to Foxboro, whether that person is an in-house option like Stidham or an outside candidate like Andy Dalton, Marcus Mariota, Teddy Bridgewater, Cam Newton, Blake Bortles, Case Keenum, AJ McCarron or Chase Daniel.

What we do know is that Stidham would be a better choice next season than overdrafting a player like Jordan Love or Jacob Eason when no one knows if they’ll even be better than Stidham long term.

The greatest appeal of Stidham is his cost. He counts less than $750k against the salary cap next season. If the Patriots elected to move on from Brady and roll with Stidham, they would have nearly $30 million to play around with in free agency. That’s still not a ton, but it’s more than they could spend with a veteran in house.

Would the Patriots roll with Stidham? It’s a huge risk, and it would put a ton of pressure on the Patriots’ running game and defense. But that cap hit is attractive for a starter. 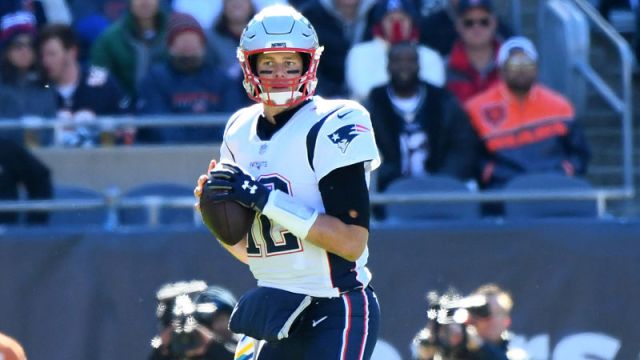