The New England Patriots kicker drilled a 50-yard field goal as time expired to give his team a 20-17 win over the Arizona Cardinals.

Cam Newton completed just 9 of 18 passes for 84 yards with two interceptions, and the Patriots managed just 179 yards of total offense. But their defense delivered multiple clutch stops, including a goal-line stand in the closing seconds of the first half.

The win improves the Patriots to 5-6 on the season. They’ll visit the Los Angeles Chargers next Sunday for the first of three consecutive road games.

Can Cam Newton guide the Patriots into field-goal range?

Fourth quarter, 4:27, 17-17: A ghastly interception by Cam Newton set the Cardinals up in Patriots territory.

Arizona can take the lead with a field goal.

The score capped a 16-play, 80-yard drive that featured eight first downs. Jason McCourty and Stephon Gilmore both were flagged for defensive holding in the end zone — on fourth and third down, respectively — and Adrian Phillips and J.C. Jackson both left the field with injuries (though Phillips returned on the ensuing kickoff).

The drive also included a questionable Patriots challenge (on a sideline catch by DeAndre Hopkins) that robbed New England of a timeout.

Already with two quarterback hits and a tackle for loss, Butler made yet another key play when he got his right paw on a third-down pass from Kyler Murray. The ball ricocheted skyward before settling into the arms of Adrian Phillips for an interception.

The Patriots proceeded to embark on a six-play, 31-yard scoring drive that began with an 18-yard Damien Harris run and culminated in a 1-yard touchdown run by James White on third-and-goal.

Third quarter, 7:46, 10-10: The Patriots forced a Cardinals punt to start the second half — with Adam Butler providing a key tackle for loss to set up a third-and-11 situation — and Gunner Olszewski returned said punt for his first NFL touchdown.

One problem, though: Anfernee Jennings was flagged for an illegal blindside block, negating the touchdown and pushing the Patriots back to the Cardinals’ 39-yard line.

Jennings’ block would’ve been a clean hit at most points in NFL history, but new rules implemented within the last few years penalize any player who blocks a defender while moving toward his own end zone.

We can’t say we agree with that rule. Regardless, no touchdown for Olszewski.

The penalty ended up taking four points away from the Patriots, who reached the red zone but settled for a Nick Folk field goal.

Halftime, Cardinals 10-7: The first half concluded with a massive fourth-down stop by the Patriots’ defense.

Facing fourth-and-goal from inside the 1, Kliff Kingsbury opted to keep his offense on the field, looking to go up 10 heading into the locker room. He called an inside run to Kenyan Drake, and Akeem Spence and Ja’Whaun Bentley teamed up to stuff Drake for no gain.

Spence, a practice squad call-up, has shown up several times in run defense today. The Cardinals are averaging just 3.1 yards per carry thus far, and Kyler Murray has one rush for -2 yards.

Officials reviewed the goal-line stand — which came at the end of a 15-play, 71-yard drive — but the call on the field stood. Arizona will receive the second-half kickoff.

The Patriots need more from their offense in the second half. Cam Newton is just 3-of-8 for 37 yards with an interception and two sacks, with 17 of those yards coming on one screen pass to Damiere Byrd.

Second quarter, 10:09, Cardinals 10-7: The Patriots’ defense is beginning to settle down. They just forced Arizona’s first punt of the afternoon.

Former Michigan teammates Josh Uche and Chase Winovich teamed up for the Patriots’ first “sack” of the game,” with Uche doing a nice job of keeping the elusive Kyler Murray contained on one side of the line and Winovich pursuing Murray to the opposite sideline.

The Cardinals quarterback ultimately ran out of bounds behind the line, which went down as a sack for Winovich.

Second quarter, 14:15, Cardinals 10-7: The Patriots went aggressive in the Cardinals’ red zone, and it paid off.

Facing fourth-and-2 from Arizona’s 7-yard line after an unsuccessful jet sweep to Gunner Olszewski, Josh McDaniels dialed up an old-school option play. Can Newton pitched to James White, who took it in for his first touchdown of the season.

The drive featured a few lowlights from N’Keal Harry, who was flagged for holding and couldn’t haul in a slant near the goal line.

Justin Herron checked in for Jermaine Eluemunor at left tackle during the drive. We’ll see if that was a planned rotation or a replacement.

First quarter, 1:49, Cardinals 10-0: Suspect run defense allowed the Cardinals to escape the shadow of their own goal line and mount a productive drive, but the Patriots tightened in their own territory.

Stephon Gilmore played a Kyler Murray quarterback run well, forcing the quarterback to step out of bounds for a 2-yard loss. Adam Butler, who missed the first game of his NFL career last week, then got to Kyler Murray to force a second-down incompletion, and Jonathan Jones’ strong finished forced Andy Isabella out of bounds on third down.

The Cardinals settled for a field goal.

New England has 24 total yards through two drives, and its only other first down came on a Cardinals penalty. Cam Newton also has not completed a pass other than Byrd’s screen, going 1-for-4 with an interception and a sack.

The Patriots at least received an excellent punt by Jake Bailey, who pinned Arizona at its own 3-yard line after Newton fired incomplete to Byrd on third-and-6.

First quarter, 12:09, Cardinals 7-0: It took the Cardinals less than three minutes to score the first points of the afternoon.

Arizona linebacker Jordan Hicks went unblocked on a third-down blitz and hit Cam Newton as he threw, resulting in the quarterback’s first interception in five games.

With possession deep in Patriots territory, the Cardinals picked up 19 yards on a pop pass to speedster Andy Isabella — whom Stephon Gilmore and Chase Winovich tried and failed to bring down in the open field — then scored on a 1-yard touchdown run by Kenyan Drake two plays later.

Poor blitz pickup and missed tackles. Those were two of the Patriots’ big issues in last week’s loss to the Texans, and they’ve stuck New England in an early hole here today.

In a notable change, Donte Moncrief, not Gunner Olszewski, was back deep to return the opening kickoff. The ball bounced in the end zone for a touchback.

12:35 p.m.: Based on pregame warmups, it looks like Jermaine Eluemunor will start in Isaiah Wynn’s usual spot at left tackle.

Eluemunor was the Patriots’ top right tackle early in the season but has started just one career game on the left side, for the Baltimore Ravens in 2018. Justin Herron and Korey Cunningham will be the reserve tackles today.

We also got our first look at defensive tackle Akeem Spence, who was elevated from the practice squad. Spence will wear No. 52 in his Patriots debut. That number — which rarely is worn by D-tackles — previously belonged to linebacker Brandon Copeland, who is on injured reserve.

— Second-round draft pick Kyle Dugger missed practice Thursday with a toe injury and was listed as questionable, but he’s active. That’s a significant boost for the Patriots’ defense.

Dugger could play a key role in New England’s effort to corral Kyler Murray, who boasts elite quickness and elusiveness. He did so two weeks ago, tallying a career-high 12 tackles as the Patriots shut down Lamar Jackson and the Baltimore Ravens.

“It?s great to have him out there,” Belichick said Friday. “Playing down there in the box, playing deep. He?s a bigger body, he?s a physical player, so getting him down there definitely helps our defense, especially on the end of the line of scrimmage in terms of his athleticism and kind of dealing with these mobile guys. If he gets blocked in the run game, he?s able to defeat those blocks, and if the quarterback gets out there outside, he?s athletic enough to make those plays. He?s definitely shown up in that regard.

“He can cover, he can play deep, he can play down in the box. He?s gotten some good opportunities, he?s taken advantage of them, and I like seeing him out there on the field.”

Dugger does need to clean up his coverage, as he allowed multiple chunk plays to Houston Texans tight ends last week.

— Running back Sony Michel officially is active for the first time since Week 3.

9 a.m. ET: Good morning from Gillette Stadium, where the New England Patriots are preparing to take on Kyler Murray and the Arizona Cardinals.

Wynn is New England’s starting left tackle, Burkhead its most versatile back and Davis a key run defender. All three will be difficult to replace.

Jermaine Eluemunor and Herron are the two most obvious candidates to start at left tackle in Wynn’s absence. Joe Thuney and Mike Onwenu also could be options there.

Running back Sony Michel is expected to return to the lineup today after sitting out the last seven games. He’ll help fill the backfield void but is far more one-dimensional than the dual-threat Burkhead.

Murray, Arizona’s exciting young quarterback, was removed from the injury report Friday, but he was limited for much of the week with a shoulder injury. We’ll be keeping a close eye on that shoulder this afternoon.

If the 4-6 Patriots want to have any chance of making an unlikely late-season push for a playoff spot, they’ll need to win this game. The 6-4 Cardinals are pegged as two-point road favorites.

Kickoff is set for 1 p.m. ET. Keep it locked right here throughout the day for full pre- and in-game coverage from Foxboro. 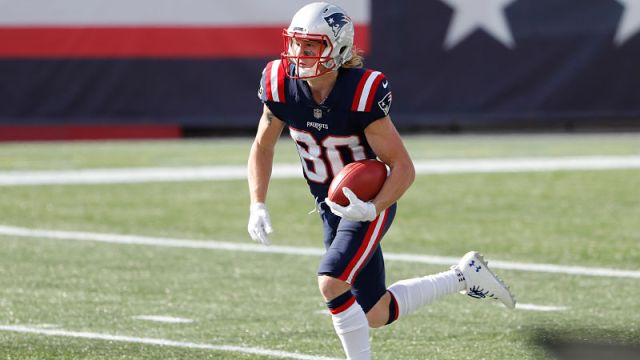 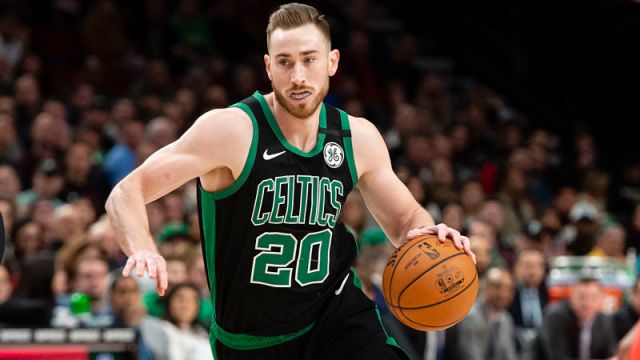