James Harden is on his way to Brooklyn.

That is quite the ‘Big Three.’ It will either serve as the best team in the Eastern Conference, and arguably the most talented offensive group in the entire league, or a complete dumpster fire. It feels as though there is no in-between.

With that being said, we want to dissect what it all means for the Boston Celtics, a fellow Eastern Conference foe. But first, let’s address the folks asking why the Celtics weren’t able to package a trade for Harden.

The Celtics reportedly were in talks to acquire Harden last month. At the time, though, reports indicated the Rockets’ asking price was too steep. Based on Houston’s return for Harden on Wednesday, which includes four first-round picks, four pick swaps as well as three players — Victor Oladipo, Dante Exum, Rodions Kurucs — in what turned out to be a four-team trade, we can confirm those reports. That is a haul. There is no way Danny Ainge, who loves his share of multi-team deals, was going to come up with anything close to that. 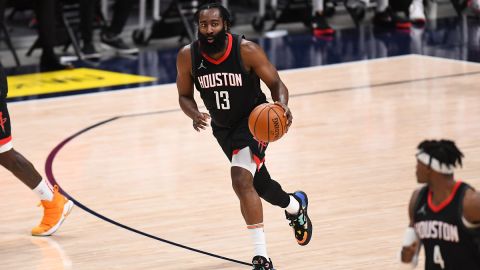 ESPN’s Adrian Wojnarowski indicated Wednesday before the trade how Boston’s Jaylen Brown essentially became “untouchable.” Wojnarowski noted how Brown’s stellar start to the season — career-best 26.3 points per game on career-high 54 percent from the field — made it that way. Well, from the Houston perspective, Brown would have needed to be included for the Rockets to entertain the offer. It likely would have been the starting point. Celtics fans should be happy Brown isn’t on his way to the Rockets, even if that meant Harden would be en route to Boston.

Now, let’s address the short term. The Nets, atleast on paper, are better than the Celtics. There’s no doubt about it. Brooklyn can now boast a five-best lineup which includes three of the premier players in the league, especially on the offensive end. Who knows who will start, or if one of the three will play with the bench. When the calendar turns to playoff time and the Nets are in a grind-it-out game, they will have three of the best players on the floor, and in some cases, the three best.

Obviously, we’re working under the impression that this will all work out — that Durant, Harden and Irving will work well together. We’re working under the impression that there will not be a fight over the one basketball that, at least upon last check, is the only one teams are allowed to play with. That, of course, could all go very, very wrong. If you’ve paid any attention to the drama that surrounded both Harden and Irving the last few days, you can tell they put themselves about all else. So, maybe it doesn’t work.

But if it does, the Celtics and the rest of the Eastern Conference will be in trouble. It could even mean the NBA postseason runs through Brooklyn for the next three seasons, as all three are unrestricted free agents entering the 2023 season.

Here’s where it comes back to the Celtics. And let’s be clear: We’re not saying Boston should chalk up the next three championships for the Nets. But mortgaging their long-term future and impacting the potential of Jayson Tatum and Jaylen Brown, who will be in midst of their primes in 2023, for a three-year window of Harden would not make any sense. Boston will be right there at the end of it, and who knows, maybe could even put the Nets in another bind like they did with the Kevin Garnett-Paul Pierce trade.