Patriots kicker Nick Folk has been dynamite since his arrival in New England midway through the 2019 season.

Folk took it a step further Sunday, though, etching his name in the record books as he set a new franchise record with 32 consecutive made field goals. Folk, who entered New England’s 25-6 win having made 29 straight, set the record with his 32-yard kick in the third quarter. It gave the Patriots a 22-3 advantage before his fourth kick concluded the contest.

“I’ve heard (I broke the record), but doesn’t matter to me really,” Folk said during his postgame press conference. “I’ve never been one for records, so all that credit goes to really Jake and Joe the last two years. Cam, Joe and Bill for believing in me. That all goes to them. I’m just lucky enough to score points.”

It’s obviously a special recognition given Folk’s predecessors include a pair of future Hall of Famers in Gostkowski and, before him, Adam Vinatieri.

“Two great kickers, legendary kickers. I’m just lucky enough to get to follow them,” Folk said. “As far as being in the same conversation, like I said, it doesn’t necessarily matter to me. I’m just happy we got the win today. I’d like to get a lot more wins, so if we have to win 2-0 or 3-0 or score bunch of extra points, I don’t care either way. I just want to win. That’s all I’m about.”

Folk and the Patriots moved to 1-1 on the season with their Week 2 win over the Jets. New England will return home to face the New Orleans Saints in Week 3. 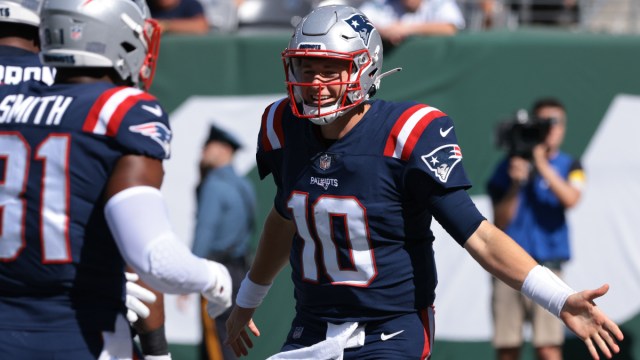