FOXBORO, Mass. — Sunday presented an ideal get-right opportunity for Mac Jones and the slumping New England Patriots, and they capitalized.

The Patriots snapped their two-game losing skid by decimating a COVID-depleted Jacksonville Jaguars team 50-10 at Gillette Stadium. Jones, who’d struggled in consecutive losses to the Indianapolis Colts and Buffalo Bills, was excellent, going 22 of 30 for 227 yards and three touchdowns with no interceptions and a passer rating of 128.1.

With the Tennessee Titans routing the Miami Dolphins on Sunday, the Patriots’ win clinched them a spot in the 2021 NFL playoffs. They’ll close out the regular season with a trip to Miami next Sunday.

— After starting slowly against Indianapolis and Buffalo, the Patriots’ offense shot out of the gate Sunday, marching 70 yards in 11 plays on their opening drive. Jones was an efficient 5-for-5 for 47 yards, before handing to Damien Harris for a 1-yard touchdown that opened the scoring.

Jones settled in by completing a series of short, easy throws that exploited holes in Jacksonville’s patchwork defense. These included a pair of third-down conversions to Jakobi Meyers, who was Jones’ lone reliable target in last week’s loss. (In that game, Jones was 6-for-8 on throws to Meyers and 8-for-24 on passes to all other players.)

The Patriots were just getting started. They scored touchdowns on each of their next three drives, as well, to take a commanding 28-3 halftime lead. Jones didn’t throw his first incompletion until the 8:17 mark of the second quarter — cornerback Chris Claybrooks got his hand on a corner route by Hunter Henry — and went into the locker room having completed 12 of 14 passes for 107 yards and two touchdowns.

Wilkerson, who entered Sunday with zero career receptions, finished with four catches on eight targets for 42 and two touchdowns.

On the first, he got open in the back of the end zone on a Jones rollout.

On the second, he capitalized on a blatant coverage bust, with Jacksonville biting hard on a fake screen to Kendrick Bourne.

Wilkerson also showed a burgeoning connection with Jones this past summer, leading the Patriots with 13 preseason receptions on 17 targets for 147 yards. A 2020 undrafted free agent out of FCS Southeast Missouri State, he was viewed as a dark-horse roster candidate until a rash of drops crushed his chances of cracking the initial 53. (Wilkerson had a third would-be touchdown hit off his hands in the fourth quarter.)

The 24-year-old has impressed behind the scenes, however — head coach Bill Belichick said he typically portrays the opponent’s No. 1 receiver in practice and is “a guy we have trouble covering” — and could be poised for a larger role moving forward.

Wilkerson’s breakout came at the expense of 2019 first-round draft pick N’Keal Harry, who was a healthy scratch for Sunday’s game. The Patriots also were without starting wideout Nelson Agholor, who missed his second straight game with a concussion.

— Jones’ other touchdown came on his prettiest pass of the afternoon: an arcing 4-yard rainbow to Meyers in the corner of the end zone.

It was Jones’ 20th touchdown pass of the season, breaking the Patriots rookie record previously held by Jim Plunkett (19 in 1971).

Meyers was the Patriots’ leading receiver Sunday, catching all eight of his targets from Jones for 73 yards.

— Even one of Jones’ few miscues wound up benefiting New England. He waited too long in the pocket on one second-quarterback dropback and was sacked by defensive lineman Jihad Ward, but Ward was flagged for roughing the passer, giving the Patriots a free first down. They scored four plays later.

Overall, the Patriots’ O-line held up well against Jacksonville’s front. The Jags finished without an official sack or quarterback hit.

On one play when Jacksonville did generate interior pressure, Jones rolled to his right and threw on the run to Henry to move the chains on third-and-6.

— The Patriots were able to remedy one of their biggest problems from last week’s game: third-and-long.

Against Buffalo, they faced third-and-7 or longer eight times, a result of their poor early-down execution. On Sunday, they didn’t face a single third down longer than 6 yards until after backup Brian Hoyer replaced Jones early in the fourth quarter.

Facing more easily convertible situations, the Patriots went a sterling 8-for-10 on third down in the win. They scored touchdowns on six of their first seven possessions and punted just once.

— Yes, they were facing a two-win Jaguars team that had 17 players on the reserve/COVID-19 list, but the Patriots did what they were supposed to do on Sunday: blow out an undermanned and overmatched opponent.

For Jones, this was reminiscent of some of the promisingly efficient performances he put together early in the season. There weren’t many aggressive downfield shots, but the rookie patiently picked apart Jacksonville’s secondary with a steady stream of short and intermediate throws. He completed just two passes that traveled more than 10 yards in the air: the second Wilkerson touchdown and a third-down conversion to Meyers caught 12 yards downfield.

This is what the Patriots need from Jones: be accurate, protect the ball, make good decisions. He got back to that formula Sunday, which — even against the Jags’ JV team — should inspire confidence as New England heads toward the postseason. 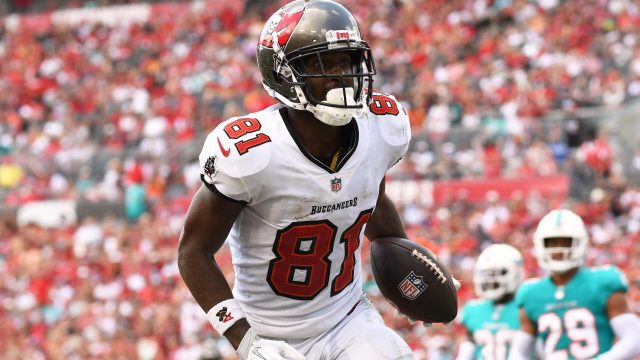