Why Bill Belichick Doesn't Put Stock Into 'No. 1 Cornerback' Title Skip to content

The Patriots’ top cornerback has jumped off the page during the last few seasons. New England’s secondary previously was headlined by former Defensive Player of the Year Stephon Gilmore before J.C. Jackson’s ascension last season.

But with the trade of Gilmore one year ago and the departure of Jackson this spring, that “No. 1 cornerback” role isn’t as easy to decipher. Jalen Mills looks like the front-runner for the job. Career slot man Jonathan Jones has alsoput together some highlights on the outside in training camp, but questions remain.

Patriots head coach Bill Belichick, however, doesn’t seem to put much stock into the title, despite being commonplace elsewhere around the league. Labeling starters on the depth chart to be anything more than starters isn’t something Belichick, who doesn’t even have an offensive or defensive coordinator, seems to concern himself with.

“I don’t know. I mean, defensively you have who you have, and you play with who you play with,” Belichick said Tuesday when questioned about the top cornerback designation, per the team. “I don’t know. Number them however you want, it doesn’t make a difference to me. You have to put 11 guys out there and they have to play well together, whoever those 11 guys are. So, yeah, I don’t know. Number one, number two, number one tackle, number two corner, I’m not sure. I’m confused about that.”

Belichick offered a typical blanket statement regarding the depth at the cornerback position before the Patriots hosted the Carolina Panthers in their first of two joint practices.

“I think everybody out there is competing to be the best they can be,” Belichick said. “Whatever that turns out to be, I don’t know. We’ll see.”

Mills and Jones project to be the top spots on the outside. Mills was behind Jackson before he left for the Los Angeles Chargers this offseason, but has impressed this summer while spending his time solely on the outside. Jones has looked good in the new spot, as well. Fellow cornerbacks like Terrance Mitchell, Malcolm Butler and rookie Jack Jones also have spent time on the outside while fellow draftee Marcus Jones has had a strong camp and could start in the slot in place of Jonathan Jones.

“He’s been good. Jalen’s a very hard-working kid,” Belichick said of Mills. “Smart. Has a lot of position flexibility. We’ve used him primarily outside, but he’s played inside, he’s played safety. Could probably play any of those positions pretty well, but our depth at safety right now looks okay, so he’s primarily outside.”

It’ll be interesting to see if Mills and company give New England enough while seemingly still lacking a clear-cut No. 1 option. 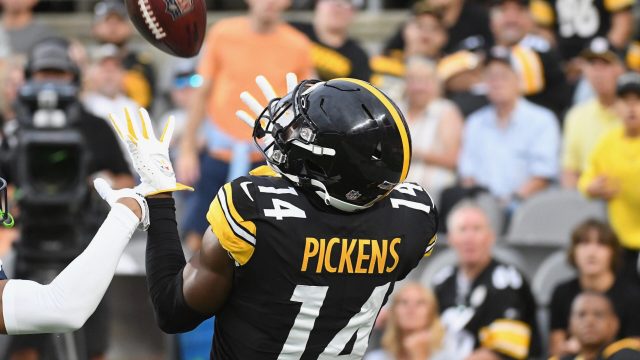