Final, Bruins 3-2: And Milan Lucic is the hero.

The Bruins forward blocked a shot high in the Boston zone, and he was off to the races as the loose puck trickled down the ice. He beat everyone in a white jersey before taking it all the way down and scoring five-hole on Sergei Bobrovsky.

He just made a nice glove save on a Nick Foligno backhander from the slot to keep this game going.

Overtime, 1:00, 2-2: Brandon Dubinsky had the first real chance of overtime, but he lost control of the puck in front of the net.

End third period, 2-2: No real good scoring chances in the final minutes for either team, and we are heading to overtime.

Both teams are 1-1 in overtime this year.

Seconds after the penalty expired, Johnny Boychuk leveled Brandon Dubinsky with a big hit in the Boston end that got the crowd going.

Third period, 12:36, 2-2: The Bruins aren’t making it easy on themselves here in the third period.

Brad Marchand is going to the penalty box for interference, and the B’s must kill off yet another penalty.

He was able to slide the leg out to get to the MacKenzie bid in front, and the game remains tied 2-2.

Third period, 9:10, 2-2: The Bruins are now up to 25 straight successful penalty kills after killing off the Chris Kelly tripping penalty.

Chris Kelly was just sent to the penalty box for tripping, and Boston is looking to make it 25 straight.

Third period, 4:05, 2-2: Chad Johnson was just called on to make his two biggest saves of the night, and he delivered.

Johnson first stopped Ryan Johansen after he took a pass from Brandon Dubinsky, and a few moments later, Johnson had to stop Cam Atkinson on a breakaway.

Easily the two biggest saves of the night for Johnson, and it keeps the game tied for now.

Boston is outshooting Columbus 23-20 through 40 minutes.

Nick Foligno just scored his fourth goal of the season, and it was a pretty easy one. Chad Johnson struggled to control a rebound and actually kicked it right down the middle of the slot where Foligno was waiting uncontested. He flipped it by Johnson beating the goalie to his right for the game-tying goal.

Second period, 15:39, Bruins 2-1: Apparently it was Ryan Johansen — not Marian Gaborik — who hit the post a couple of minutes ago. Apologies.

The Columbus sniper just beat Chad Johnson with a wrist shot, but the puck hit the post and bounced away to keep the Boston lead intact.

Second period, 10:09, Bruins 2-1: It looked at first glance like Shawn Thornton had picked a corner with a wicked slap shot. While he did just score his second goal of the season, it was with a little help.

Thornton just gave the Bruins a 2-1 lead when he scored his second goal of the season. He took a drop pass from Gregory Campbell and then blasted it toward the net. The puck ramped up Jack Johnson’s stick and beat Sergei Bobrovsky to give Boston the lead.

He just jumped into a rush and was found by Jarome Iginla who passed it back toward the right slot for Krug who blasted a one-timer. However, he put it right into Sergei Bobrovsky’s stomach for an easy save.

Second period, 5:53, 1-1: David Krejci is not really showing any ill effects of the hit he took in the first.

He just showed no reservations about going to the front of the net, and it almost paid off for him. Jarome Iginla threw the puck at the net from the left faceoff dot, and Krejci couldn’t quite corral it to put a shot on from right in front.

Second period, 2:28, 1-1: Carl Soderberg had a fantastic chance to give the Bruins a 2-1 lead, but he might have out-thought himself.

Soderberg deked a couple of times before it looked like he kind of just lost control of the puck. He tried to get a shot on, but Sergei Bobrovsky made the “save.”

Second period, 0:01, 1-1: The second period is underway from TD Garden, and David Krejci is on the ice after leaving in the first.

End first period, 1-1: The siren just sounded on the first period, and thanks to Loui Eriksson’s late goal, the teams will go to the dressing rooms tied 1-1.

The Bruins outshot Columbus 11-8 in the first.

One of the big stories we’ll be keeping an eye and waiting for an update on will be the status of David Krejci. The center took a big hit from Brandon Dubinsky during the first period, and he took a while to get up. He eventually skated off (slowly) before heading down the tunnel. We haven’t seen him since.

Loui Eriksson will be credited with the game-tying goal, as a Zdeno Chara shot wen off the Bruins forward’s skate and by Sergei Bobrovsky.

Torey Krug carried the puck into the zone before finding Reilly Smith on the left wing. Smith looked to beat Sergei Bobrovsky with a shot that trickled through the goalie’s legs, but it was swiped off the goal line before Carl Soderberg could jam it in the net.

Dougie Hamilton and Zdeno Chara got beat to a puck below the red line where Mark Letestu backhanded it to Blake Comeau who was crashing down the slot. Comeau flipped it by Chad Johnson for the game’s first goal.

First period, 10:35, 0-0: The Bruins can ill-afford an injury to a player like David Krejci, but it looks like that’s what they could be dealing with.

Brandon Dubinsky caught Krejci in a pretty vulnerable position in the corner in the Columbus end, and he planted Krejci face-first into the boards/glass. Krejci appeared to be falling as Dubinsky came in to put the hit on him.

Krejci was down for a while, and he eventually got up on one knee. He stayed like that for a bit while being looked at. He skated off and went down the tunnel. We’ll keep you updated.

Milan Lucic, who got in Dubinsky’s face after the play, was eventually called for roughing.

First period, 7:54, 0-0: Like the Bruins, the Blue Jackets were unsuccessful on the first power play of the game, and the B’s have now killed off 23 straight penalties.

Chad Johnson made his most impressive save of the night when he made a calm glove save on a quick shot in front from Brandon Dubinsky who took the pass from R.J. Umberger.

Columbus managed two shots on goal on the power play.

First period, 5:15: Columbus is going on the power play now.

Matt Bartkowski was called for interference, and the Blue Jackets’ power play goes to work.

The Bruins kept the puck in the Columbus zone, and they got two shots on goal, but that was about it.

Brandon Dubinsky is going to the box for slashing, and the B’s are on the man-advantage.

6:45 p.m.: The Bruins are going with the same lineup they used Monday against the Lightning, at least according to pregame warmups.

Long story short, the forward lines remain they same as they have for the last couple of weeks, and Matt Bartkowski is in for Adam McQuaid, which leads to a blue-line shuffle.

Get all of the lines and D-pairs by clicking here.

6:30 p.m.: The two teams have taken the ice for pregame warmups, and as expected, it will be Chad Johnson getting the start for the Bruins, while Sergei Bobrovsky goes for Columbus.

Should be a good time.

6:15 p.m.: Why hello there, and welcome to TD Garden where puck drop between the Bruins and Blue Jackets is about an hour away.

After some elevator issues (a Garden staple), we’re up here on Level 9 poking through the game notes and getting ready for the second matchup between these two teams this year. The two clubs met on Oct. 12, and the Bruins won 3-1.

Once again, the Bruins’ penalty kill is starting to come along. Boston enters the night having killed off 22 straight penalties. They’re up to eighth in the league, which is no small feat considering they were 21st in the league prior to the Dallas game, which is where the streak started. The Bruins are no strangers to long PK streaks, as they had three 20-plus kill streaks last season. THat’s certainly helped the club’s goal differential which enters the night at plus-18, which is good for tops in the Eastern Conference and is third in the league.

Those are obviously some pretty impressive numbers given where they were earlier on this homestand after losing four of five and seeing confidence waver even if it was slightly.

3 p.m.: The Bruins are on a winning streak, and they’ll have a chance to keep that positive momentum going into a rare off-weekend, starting with Thursday night.

The B’s open up a back-to-back set Thursday night, which will begin with a matchup against the Columbus Blue Jackets at TD Garden. They’ll finish the back-to-back on Friday night in Ottawa before having a game-less weekend. They’ll have a chance to take a five-game winning streak into the weekend, as they have won three in a row leading up to Thursday’s game with the Blue Jackets.

It begins a pair of games the Bruins should definitely win. Only Buffalo and Edmonton have fewer points this season than Columbus has this season. Injuries have certainly taken a toll on that, but the Jackets come in with a 6-10-1 record, which includes six losses in their last 10 games.

Thursday’s game won’t mark Nathan Horton’s first game against his old team. The former Bruins winger is still recovering from offseason shoulder surgery. He’s made strides and has returned to skating, but he’s not quite ready to return just yet, despite what the Internet rumors may be saying.

Speaking of injuries, Adam McQuaid remains out for the Bruins with a lower-body injury.

Boston backup Chad Johnson was the first off the ice at morning skate, indicating he’ll get his third start of the season, and reigning Vezina Trophy winner Sergei Bobrovsky will get the nod for the Blue Jackets.

Puck drop from the Garden is scheduled for a little after 7 p.m. 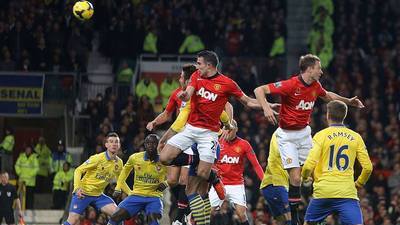