The decision to sign with the New England Patriots after the 2014 NFL draft was an easy one for undrafted tight end Justin Jones.

The 6-foot-8, 277-pound Jones had done his homework on both the Patriots and their starting tight end, Rob Gronkowski.

“I couldn’t be in a better position, especially here in New England, where they have a deficiency at tight end,” Jones said Thursday at Gillette Stadium. “Having the opportunity to learn from the greatest in the league right now. I’ve been watching Gronk forever. … All the vets have been really cordial, really friendly with us. They’re all willing to help us learn. It’s not really a, ‘ahh, he’s coming to replace me’ atmosphere. Everyone’s really cool.”

The Patriots have largely separated the rookies and veterans while the young players are acclimating to the NFL game, but Jones has touched base with Gronkowski, whom the East Carolina product has been studying since high school.

“He’s a great athlete, a great tight end,” Jones said about Gronkowski. “He’s been real friendly with me, and we’ve been in communication as much as we can around the facility. … I’ve been definitely in the film room and checking in on what’s going on with him all the time. He’s the best tight end in the league, so I can’t wait to learn as much as I can from him.”

The Patriots were expected to select a tight end in last weekend’s draft, but they instead waited until the rookie free-agent signing period to add to the position. The Patriots’ depth chart is shallow at tight end, which means that one of two undrafted rookies — Jones and Asa Watson — has a good shot at making the 53-man roster out of training camp.

“Oh man, it’s honestly — it couldn’t be a better fit for me, personally,” Jones said. “Coach (Bill) Belichick loves utilizing the tight end, and he believes that we’re guys that create mismatches and we can get open and we can use that to the best of our ability.”

Jones certainly can create mismatches with his massive size, and his 37-inch vertical leap and 6.88-second three-cone time will help as well. It’s not surprising that Jones played basketball at Heritage High School in Conyers, Ga., where he was a two-time All-State selection.

“It definitely helps teach you a little bit about body control, I think,” Jones said about his experience on the court. “Having a basketball background, even if it’s something as simple as a jump ball, which was something I was able to do well in college. It’s just like a rebound.”

Jones’ journey to the NFL wasn’t an easy one. After catching 25 passes for 346 yards with two touchdowns as a receiver in Ruffin McNeill’s air-raid offense, Jones was declared academically ineligible for his senior season. Jones said he got to work down in Atlanta to train for the combine during his year off.

“Oh man, I can’t even explain it,” Jones said when asked how it will feel to get back on the football field. “You know, after having everything kind of taken from you, it’s really a true blessing to be given the opportunity. I couldn’t be more thankful for it.” 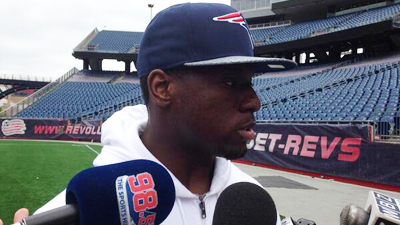