Soccer is not the United States’ most popular sport. Not by any means.

Yet every four years, millions of Americans from Hawaii to Maine tune in to watch the Stars and Stripes compete in the World Cup.

Monday night was no exception, as American fans were treated to a thrilling 2-1 win over Ghana in the USA’s opening game of the 2014 FIFA World Cup when reserve John Brooks headed in a corner kick in the 86th minute.

Bars, open spaces and almost everything in between across the country were packed with fans glued to the television screen, and when Brooks’ header crossed the goal line, everyone went nuts.

Bethlehem, Penn., wasn’t the only site of a massive gathering, as a huge contingent of supporters in Kansas City celebrated in patriotic fashion.

The ruckus in Kansas City was also captured in this amazing slow-motion video.

The awesome reactions didn’t stop there. Here are a few of our favorites.

The best of them all, however, comes from Portland, Ore., where a local news station captured the celebration live on their broadcast (video here), sparking an awesome display of patriotism from the reporter on site. Who says Americans don’t care about soccer? 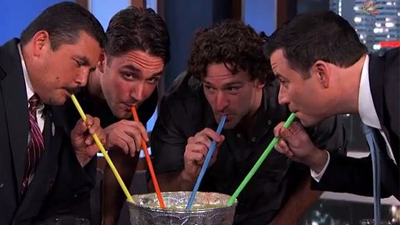