BOSTON — David Ortiz was still hot under the collar roughly 24 hours following his ejection against the Baltimore Orioles. Only this time, his anger wasn?t directed at the umpiring crew.

Jim Palmer, a Hall of Fame pitcher and longtime Orioles broadcaster, criticized Ortiz via Twitter after the slugger was tossed for arguing a check-swing strike call in Sunday?s game at Fenway Park. Ortiz was informed of Palmer?s criticism after the Boston Red Sox?s 7-1, rain-shortened win Monday, and the designated hitter voiced his displeasure.

“That’s how he wants to get respect from us? Is that how he wants me to respect him? It’s not going to happen,? Ortiz said rather angrily at his locker.

Ortiz was ejected Sunday by home plate umpire John Tumpane, who filled in for an injured Paul Emmel, after disagreeing with a pair of calls made by third base umpire Jerry Meals. Big Papi slammed his bat and flung his elbow guard in disgust before returning to the clubhouse, which prompted Palmer, who did not travel with the Orioles, to hammer the nine-time All-Star?s actions — first through Twitter and then in an email with ESPN.com.

ESPN.com?s Gordon Edes asked Ortiz after Monday?s game whether he ever had any issues with Palmer in the past.

“No, actually I thought that he was one of my guys,” Ortiz said. “All of a sudden now he’s killing me, huh? I guess anybody who wants to get famous or make some noise comes to Papi, right?”

The Red Sox travel to Baltimore later this week for a three-game set starting Friday. Perhaps Ortiz will cool down by then, but one probably shouldn?t expect him and Palmer to sit down for dinner. 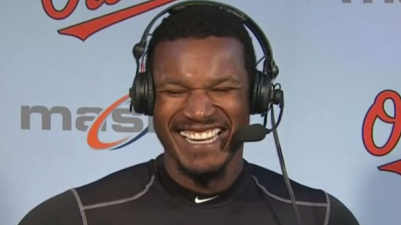