The Boston Red Sox’s comeback fell short Saturday night at Camden Yards with a 5-4 loss to the Baltimore Orioles in 10 innings.

Boston tied the game at 3 in the ninth and took the lead when Xander Bogaerts hit a solo home run in the top of the 10th. However, the Orioles scored two runs in the bottom of the inning, including a walk-off homer by David Lough.

The win snapped Baltimore’s five-game skid, its longest since September 2013.

GAME IN A WORD
Bullpen.

Both bullpens blew a save and combined to give up six hits and four earned runs.

IT WAS OVER WHEN …
The Red Sox had runners on second and third with two outs in the bottom of the ninth. Orioles reliever Zach Britton prevented further damage by striking out Allen Craig to end the inning.

IN THE BATTER’S BOX
— Mike Napoli went 3-for-4 with a two-run homer — his first of the season — in the second inning. He was 0-for-9 in his previous two games for Boston.

— Hanley Ramirez was 2-for-3 with a walk and a run scored for the Red Sox.

— Bogaerts went 1-for-4 with his first home run of the season in the 10th inning.

— Jimmy Paredes dominated at the plate, going 4-for-5 with two RBIs and two runs scored. His RBI double in the first inning gave Baltimore an early lead, and his solo home run in the fifth broke a 2-2 tie.

— Chris Davis went 1-for-3 with a single and a walk. He collected RBIs for the Orioles on sacrifice flies in the first and 10th innings.

— Lough hit the walk-off homer with no outs and none on in the 10th.

ON THE BUMP
— Red Sox starter Justin Masterson didn’t pitch poorly, but his performance also wasn’t good enough to pick up a win. He threw 90 pitches (53 strikes) through seven innings and gave up seven hits, three earned runs and one walk.

Red Sox starters have recorded an out in the seventh inning in just four of 18 games this season.

— Matt Barnes, whom the Red Sox recalled from Triple-A Pawtucket on Saturday, pitched two scoreless innings out of the bullpen.

— Zach Britton blew a save in the ninth inning with a few poor pitches and some bad defense, which included his own mishap when trying to field a Napoli ground ball that loaded the bases. He walked Dustin Pedroia to begin the inning.

— Red Sox closer Koji Uehara also blew a save. He gave up a triple to Adam Jones, who scored on a sacrifice fly, then allowed the walk-off home run by Lough. All of this occurred in the 10th inning.

UP NEXT
The Red Sox and Orioles conclude their three-game series Sunday at 1:35 p.m. ET. Wade Miley (Boston) and Bud Norris (Baltimore) are the probable starting pitchers. 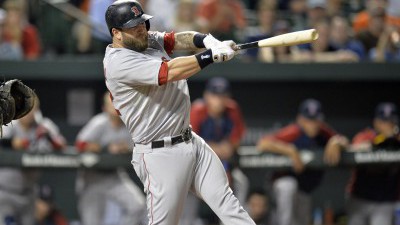