Boston scored twice in the final four minutes to stun the Metropolitan Division leaders 4-3 in a game that featured three lead changes, three ties and a hearty helping of controversy.

IT WAS OVER WHEN…
Ryan Spooner scored on the power play to tie the game with 3:46 to play, and David Krejci potted the game-winner 2:03 later to extend Boston’s win streak to five games.

David Krejci with the go-ahead goal late in the 3rd period! pic.twitter.com/plUp8GCCgM

Hayes, who enjoyed modest success on Boston’s third line earlier this season, had been a non-factor since being placed with top-liners Brad Marchand and Patrice Bergeron and had gone without a point in nine games dating back to Nov. 5. Vatrano, meanwhile, was coming off a game in which he scored two goals, including an overtime game-winner.

HANGOVER? HARDLY
You’d never have known from watching the first period that these teams were playing at 1 p.m. on the day after Thanksgiving. The opening 20 minutes featured chances galore for both sides, with Patrice Bergeron turning one of his into the game’s first goal.

Patrice Bergeron slides one through Henrik Lundqvist. His 8th of the season! pic.twitter.com/RTJME71NWx

The goaltenders were the stars of the frame, however, with New York’s Henrik Lundqvist looking especially sharp. Lundqvist, apparently eager to put Wednesday’s 5-1 loss to the Montreal Canadiens behind him, foiled grade-A bids by Joonas Kemppainen, Loui Eriksson, Matt Beleskey and Vatrano in an 11-save first period.

SAME OLD SECOND
The second period again proved problematic for the Bruins, who surrendered two goals in the first 5:15 to fall behind. Oscar Lindberg and Rick Nash both took advantage of defensive lapses to light the lamp for the Rangers.

Just a really brutal sequence by the Bruins pic.twitter.com/qj4CyKAgVS

Including Friday, Boston has allowed seven second-period goals in its last three games.

The momentum shifted back in the Bruins’ favor, after an incident involving Matt Beleskey, Derek Stepan and Dylan McIlrath midway through the period. Beleskey leveled Stepan after the Rangers center had released the puck, and McIlrath retaliated by accosting Beleskey along the side boards.

McIlrath got the best of Beleskey in a quick fight, but the resulting discipline benefited the Bruins. Beleskey was given five minutes for fighting, but McIlrath was slapped with a two-minute instigator penalty and a 10-minute misconduct on top of his fighting major, putting Boston on the power play.

Brett Connolly capitalized on the ensuing man advantage, putting one past Lundqvist for his first goal since Halloween and the Bruins’ first power-play tally in four games.

Connolly wrister on the power play ties the game pic.twitter.com/WJzMSbVlFG

Colin Miller and Hayes assisted on the goal, snapping the latter’s point-less streak. Stepan, meanwhile, did not return to the bench for the third period.

INTERFERENCE?
Another controversial sequence came with the score tied midway through the third period, when a questionable goaltender interference call on Marchand gave the Rangers a power play.

Marchand is sent to the sin-bin for this: #ThanksgivingShowdown pic.twitter.com/Sfiv6u7YDf

Replays clearly showed Marchand making contact with the New York netminder, but they also showed Lundvist pausing for a moment before whipping his head back, prompting the Garden crowd to loudly petition for an embellishment call.

No such call came, and the Rangers took a late lead with Marchand in the penalty box. Keith Yandle’s wrist shot rang the right post but deflected off the back of Bruins goalie Tuukka Rask and into the net.

UP NEXT
Get ready for some late nights, Bruins fans. Boston’s next three games will come on the road against Pacific Division opponents, beginning Wednesday against the Edmonton Oilers. Puck drop for that one is set for 9:30 p.m. ET. 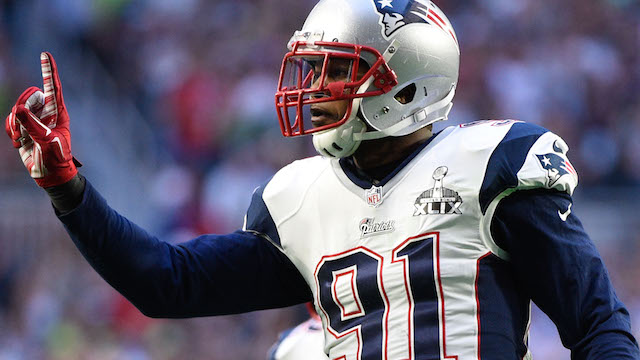