With the Minnesota Vikings next up on the New England Patriots’ docket, can we talk about Kirk Cousins for a minute?

On this week’s NESN Patriots Podcast, Zack Cox and I discussed where Cousins ranks among NFL quarterbacks (26:10 mark). Is he top 10? Is he average? Is he somewhere in between?

He’s probably somewhere in between.

The case for Cousins this season is pretty easy. He’s fifth in the NFL in passing yards, third in completion percentage, ninth in touchdowns, ninth in passer rating, and he’s only thrown seven interceptions. But he’s averaging just 7.36 yards per attempt. That ranks 21st among qualified quarterbacks. He’s been sacked 28 times. That’s the 11th most in the NFL. It’s easy to say Cousins’ line stinks, but he’s sacked on average in 3.18 seconds. That’s just the 14th-fastest in the NFL.

One of the reasons Cousins’ completion percentage is so high is because he’s eating sacks rather than throwing the ball away. He’s good. But showering him with any more praise than that is overdoing it.

More likely scenario in free agency for the 2019 off season #Patriots re-sign Trey Flowers or Trent Brown? #MailDoug
— @pats_chatter247
The Flowers question is an interesting one. I’m of the opinion that the Patriots basically need to re-sign him.

What happens if they don’t?

They would have Deatrich Wise, Derek Rivers, Keionta Davis and Adrian Clayborn at defensive end. Yikes. The Patriots’ don’t trust Wise or Clayborn to play against the run at this point. Rivers and Davis were healthy scratches in Week 12, and both have struggled when they’ve been active this season.

The Patriots would have a hard time stopping any opposing offenses if that’s who they choose to trot out at defensive end next season. They haven’t won games without Flowers this season. Flowers suffered a concussion seven snaps into the Patriots’ Week 2 loss to the Jacksonville Jaguars and missed their Week 3 loss to the Detroit Lions. Flowers was neutralized in the Patriots’ Week 10 loss to the Tennessee Titans when he was held pressure-less.

So, they either need to bring back Flowers, take a player high in the 2018 NFL Draft, sign a free agent (pass rushers are not cheap) or trade for a veteran edge defender.

Isn’t the simplest option just to bring back Flowers? He’s either the best or second best defender on the roster. The Patriots won’t be struggling for cap room next offseason. Spotrac currently projects them for $24.5 million in cap space next offseason. It’s also difficult to imagine both Devin McCourty ($13.345 million) and Dont’a Hightower ($10.375 million) being on the books at their current 2019 cap hits. Tight end Dwayne Allen almost certainly will be a cap casualty at $7.4 million, and a contract extension would lower quarterback Tom Brady’s $27 million cap hit. The Patriots should have room to retain Flowers even if it’s on a franchise tag, which would cost north of $17.143 million.

And given Flowers’ low sack totals, it’s possible teams won’t be willing to give him elite pass-rush money.

As for Brown, it depends on how much he’ll cost. The Patriots could decide to roll with first-round pick Isaiah Wynn and Brown or Wynn and Marcus Cannon next year. If Brown costs as much as Cannon, then the Patriots might choose to re-sign Brown and either trade or cut Cannon. It’s unlikely Brown and Cannon will be back next season, however.

Grade the Patriots draft up too this point.
— @Owen16058167
Jeez. The easy answer is incomplete, but that’s taking the easy way out. So far, the Patriots have received nothing out of first-round pick Isaiah Wynn, second-round pick Duke Dawson, sixth-round picks Christian Sam and Braxton Berrios and seventh-rounders Danny Etling and Ryan Izzo.

Dawson is back on the active roster, but he was a healthy scratch in Week 12. Wynn, Sam, Berrios and Izzo are out for the season. Etling is on the practice squad.

First-round pick Sony Michel has been as good as advertised at running back when healthy. But he’s missed three games with knee injuries.

Fifth-round pick Ja’Whaun Bentley looked like a future starting linebacker but only made it three games before being lost for the season.

Seventh-rounder Keion Crossen has barely contributed at cornerback, but he has played special teams.

We’re looking at something in the D range after 12 games. There’s still plenty of upside in this class, and that grade will rise even when Dawson finally takes the field. But the Patriots have just got so little out of such a big draft class.

What FA signings in the off-season do you think would have helped the most given how the season has played out so far?

The Patriots haven’t seen a major dropoff from Solder to Brown.

Butler has struggled with the Tennessee Titans, and Jason McCourty has stepped up well at cornerback.

The Patriots certainly could have used Lewis while Sony Michel and Rex Burkhead were injured earlier in the season. Michel has played well as a rookie, though.

The Patriots also missed Amendola in the first four weeks of the season while Julian Edelman was suspended. They weren’t going to re-sign him for $6 million per year, though, and they didn’t know Edelman would be suspended in March.

I’d go with Lewis just because the Patriots were so shallow at running back for so many weeks, and he didn’t sign an overly exorbitant contract.

What are your expectations for Duke Dawson this week?
— @pereira_report
I don’t think this is the week to throw Dawson into the fire. The Vikings’ slot receiver is Adam Thielen, who leads the NFL in receptions, is second in receiving yards and fifth in receiving touchdowns.

The Patriots would be better off having either Stephon Gilmore or Jason McCourty cover Thielen. The Patriots could get Dawson’s feet wet next week against Amendola and the Miami Dolphins.

Which current players in the roster will be in Patriots Hall of Fame? You don’t need to answer TB12. #MailDoug
— @gcabreu87
Tom Brady, Julian Edelman, Matthew Slater, Rob Gronkowski and Devin McCourty should be locks. I’d pound the table for James White, Stephen Gostkowski and Dont’a Hightower.

Shaq Mason could get in if he starts piling up Pro Bowl and All-Pro honors. The rest is too early to tell.

Do you think a contract extension is on the way for brady?
— @tayahchor
I have no idea, but I think it would be in the best interest for everyone involved.

@DougKyed do you think Josh Mcdaniels will leave this summer for a head coaching job this summer?#MailDoug
— @Proudred_devil
The safe answer is no.

How good do you think Isaiah Wynn will be when he comes back next year?
— @Ayush_Gupta03
That’s tough to tell. He was really good in college, but we barely saw him in the preseason before he tore his Achilles.

Which game with be harder in your opinion @ Steelers or @ dolphins?
— @patroits4
At the Pittsburgh Steelers.

Rules/hypothetical Q. There seem to be many backwards passes across fball this year. What happens if a defender is flagged for PI behind LOS? Where is ball spotted?
— @stuartkirsch
You can’t commit pass interference behind the line of scrimmage.

Oatmeal chocolate chip or oatmeal raisin
— @DrChimRitchalds
Get raisins out of my damn cookies.

I?ve got nothing for the Patriots, so if you had to rank the sauce for McNuggets… what you got?
— @TheDTSB
It’s funny you ask me this question, because I got a six-piece McNuggets on Thursday, and I got hot mustard, which was delightful. I liked honey with my McNuggets as a kid. I definitely went through a barbecue sauce phase. I don’t think McNuggets go well with ranch, and I don’t remember what McDonald’s honey mustard or sweet and sour sauce is like.

I’ve been told by noted sports expert @TonyMassarotti that Sony Michel both “sucks” and “stinks”. Can you confirm?
— @runsmc
I cannot, no. I think Tony was a little premature on that one.

What’s been the stat that has impressed you the most about the Pats this year?
— @thebolenshow
8-3.

#MailDoug
Why do you hate the new live action Lion King
— @Pedmeg233
I don’t, but I just think it’s a little ridiculous to call it live action. I mean, that mandrill is not holding up a baby lion.

Can we stop calling the new Lion King live-action? I'm pretty sure this damn baboon didn't lift up a lion cub. pic.twitter.com/K1DB7aA1UJ 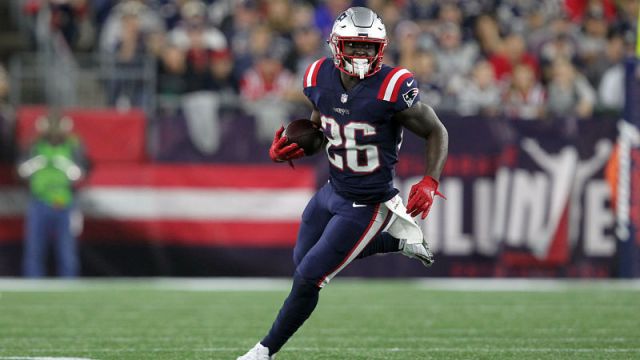