FOXBORO, Mass. — Over the last 18 seasons, the Patriots’ passing attack has been the least of New England’s worries.

Tom Brady is the greatest quarterback of all time, and he’s stayed as dependable as humanly possible (save for one season lost to a torn ACL) over the last 17-plus years. But on Sunday, and really over the past 10 quarters of Patriots action, Brady’s performance has been a weak spot for this team.

The Patriots were so close to putting together a complete team win Sunday when they beat the Buffalo Bills 24-12. They rushed for 273 yards on 47 carries for 5.8 yards per clip. They allowed just 289 yards defensively with three takeaways including two interceptions. They mostly fixed their run defense, allowing just 3.2 yards per carry to running backs. The only touchdown the Bills scored came in garbage time.

Then there was the passing offense. Blech.

Brady completed just 13 of 24 passes for 126 yards with a touchdown and two interceptions. Brady attempted only one pass that traveled over 15 yards, and it fell incomplete to tight end Rob Gronkowski. Brady had just four completions that went for 10 yards or more.

The interceptions, however, were not Brady’s fault. One came on a miscommunication with Rex Burkhead when the running back seemingly ran his route the wrong way. The other one clanged off Gronkowski’s hands. But even tossing away the interceptions, Brady doesn’t look right nor has he since halftime of the Patriots’ loss to the Miami Dolphins in Week 14.

“I feel great. I feel 100 percent,” Brady insisted after the game.

Brady was pulled for backup Brian Hoyer when the game was in hand at 24-6 with 6:39 left in the third quarter. Brady said he was not surprised he came out of the game. Patriots head coach Bill Belichick said he put in Hoyer because “I thought that was the right thing to do.?

Brady is 47-for-77 for 432 yards with two touchdowns and three interceptions since halftime of the Dolphins game. He’s not throwing deep nor to the intermediate part of the field, and his accuracy looks off. He also seems to be bailing early when pressure is bearing down. Other than that …

Belichick acknowledged the Patriots’ passing attack was a big off Sunday. He also expressed his trust in Brady to pull it together.

“I think overall our passing game will be better, could be better, but we ran the ball well, and that offset it,” Belichick said Sunday. “Some days it’s the running game, some days it’s the passing game. We’ll see what happens next week, but I have a lot of confidence in our quarterback, our receivers, our offensive line, our protection. If we need to throw it, hopefully, we’ll be able to throw it if we have to. If we have to run it, hopefully, we’ll be able to run it.”

Brady completed passes to just four receivers in his first game since Week 4 without wide receiver Josh Gordon, who was suspended indefinitely by the NFL. Gronkowski didn’t have a catch. Wide receivers Chris Hogan and Phillip Dorsett weren’t even targeted. Receiver Julian Edelman caught six of Brady’s 13 completions and picked up 70 of his 126 yards. He also scored the Patriots’ only touchdown through the air.

The Patriots have one more week to pull together their passing attack before the postseason. They moved up in AFC playoff seeding with their win and the Houston Texans’ loss Sunday, and if the Patriots win in Week 17 against the New York Jets, then they’ll clinch a first-round bye and the No. 2 seed in the AFC.

If Brady is feeling the effects of the season, that bye week would be valuable. Not that Brady is injured or anything.

It feels odd to doubt Brady and the Patriots’ passing attack. But if they can’t pull it together against the Jets next Sunday, then this unease will continue into the postseason. A vintage Brady performance at Gillette Stadium in a week could put some concerns to rest. 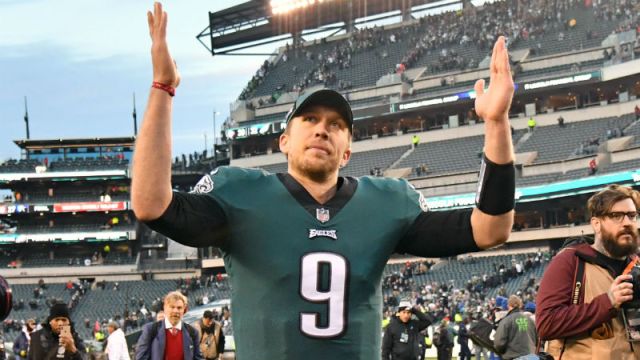