Mitch Moreland has been on the injured list with a lower back strain since May 29, but the power-hitting first baseman is now ready for his return to the lineup.

The Boston Red Sox announced Friday that Moreland was reinstated from the 10-day injured list after missing the team’s last 10 games. The 33-year-old leads the Red Sox with 13 home runs and a .550 slugging percentage.

Prior to tonight?s game against the Tampa Bay Rays, the #RedSox reinstated 1B Mitch Moreland from the 10-day injured list.

To make room for Moreland on the 25-man roster, the club optioned RHP Ryan Weber to Triple-A Pawtucket. pic.twitter.com/MtD6XXxrGb

Moreland will bat fifth and play first base in his return to the order, which is Friday’s series opener against the Tampa Bay Rays.

Right-handed pitcher Ryan Weber was optioned to Triple-A Pawtucket to make room for Moreland on the 25-man roster. Weber has appeared in six games for Boston, posting a 1-1 record with a 5.12 ERA in 19 1/3 innings pitched. 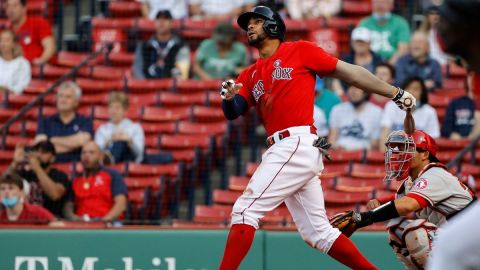