The Red Sox tied it on a Rafael Devers home run in the eighth to force extras before Mitch Moreland gave Boston an extra-inning lead. But just as it happened 24 hours prior, the Rays walked off with a win, this time 5-4 at Tropicana Field on Saturday night.

Boston used 11 pitchers in the loss.

GAME IN A WORD
Again.

The Red Sox lost two nights in a row in similar fashion by the same score in the same amount of innings played.

ON THE BUMP
— Travis Lakins worked around a one-out walk to get out of the first inning unscathed. Things weren’t as smooth in the second, though, as the right-hander gave up a double before an error by Marco Hernandez put two men on with one out.

Lakins got Kevin Kiermaier to groundout to end his night.

— Bobby Poyner got Willy Adames to strike out swinging to end the second.

— Mike Shawaryn ran into a world of trouble in the third.

The righty gave up a single to begin the inning before a walk and Travis d’Arnaud single made it 1-0. Shawaryn hit Mike Duffy after getting out No. 2, but Alex Cora had seen enough and elected to go back to his bullpen.

— Colten Brewer allowed the Rays to take a 2-0 lead when Joey Wendle hit an RBI single to right field.

— Ryan Weber picked up a strikeout in a 1-2-3 fourth and racked up two more K’s in the fifth.

He got two outs in the sixth, with the second one coming on a nice catch from Brock Holt that likely took away extra bases.

Is there anything Brock CAN'T do?? ? pic.twitter.com/v2FMyqyUww

Weber was pulled after Wednle singled.

— Josh Taylor came in to finish the inning but didn’t need to throw a pitch after picking Wendle off at first to end the sixth.

He struggled in the seventh, however, and gave up a solo dinger to Adames to give the Rays a 3-1 edge. Austin Meadows followed that up with a single to end Taylor’s night.

— Ryan Brasier took over and got the final two outs of the seventh.

— Matt Barnes struck out the side in the ninth to send the game to extras.

— Brandon Workman walked the leadoff batter in the 10th but got out of trouble to pitch a scoreless inning while picking up two strikeouts in the process.

— Josh Smith gave up a leadoff double to d’Arnaud before giving up a walk-off two-run to Nate Lowe.

Another day, another clutch @RaysBaseball hit.

IN THE BATTER’S BOX
— Boston cut its deficit in half when Xander Bogaerts blasted home run No. 32 to right field to make it 2-1.

— Just as they did  Friday night, the Red Sox tied the Rays late in the game thanks to a history-making home run off the bat of Devers in the eighth, giving him the most dingers for a Red Sox third baseman.

— Moreland played hero in the 11th when he crushed his 20th home run of the season 430 feet to center field to give the Red Sox their first lead of the game.

Us: pretends to act shocked pic.twitter.com/glo8rKIwk9

TWEET OF THE GAME
Devers just wrote his name into the Red Sox history books.

Most HR in a season by a Red Sox third baseman:

UP NEXT
Boston continues its series against Tampa Bay on Sunday afternoon. First pitch from Tropicana Field is set for 1:10 p.m. ET. 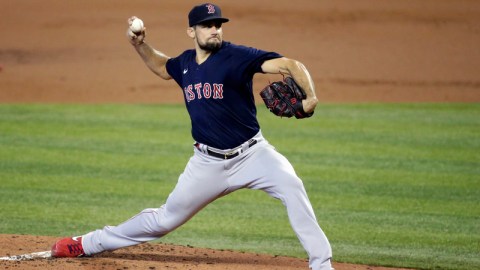 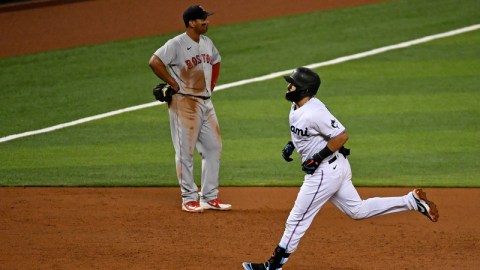 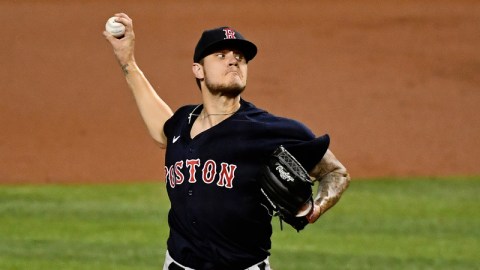