Time will tell just how much of an impact Tom Brady’s exit has on the Patriots.

But in terms of achieving the ultimate goal, Nick Wright believes New England currently finds itself in the exact same spot it was last season with Brady under center.

“Super Bowl chances without Tom Brady are unchanged from where they were last year with Tom Brady. Right around zero percent,” Wright said Tuesday on FOX Sports 1’s “First Things First.” “Listen, with or without Tom Brady in the 2019 or 2020 season, the New England Patriots were drawing dead to win the Super Bowl. As good as the defense is, in a conference where you gotta get through (Deshaun) Watson and Lamar (Jackson) and, of course, Patrick Mahomes, you ain’t going to do it whether you’re doing it with a senior citizen or whether you’re doing it with Jarrett Stidham. So, they’re unchanged. They can’t win the Super Bowl.”

"The Patriots chances to win the Super Bowl are unchanged from where they were last year with Tom Brady ? right around 0%. In a conference where you have to get through Watson, Lamar and Mahomes, youre not going to do it." ? @getnickwright pic.twitter.com/D2ngK52sEx

The Patriots’ Super Bowl LV hopes are looking pretty bleak, but let’s not act like they were a pretender from wire-to-wire last season. New England ripped off eight dominant wins to start the 2019 campaign, and it wasn’t until late in the regular season when its weaknesses became too grand to overcome.

Turning the page in the NFL always is a tall task, but Patriots fans can take solace in knowing the greatest football coach of all time is leading the way. So while New England probably won’t be playing on the first Sunday in February 2021, it might not be terribly long until the franchise returns to the big stage. 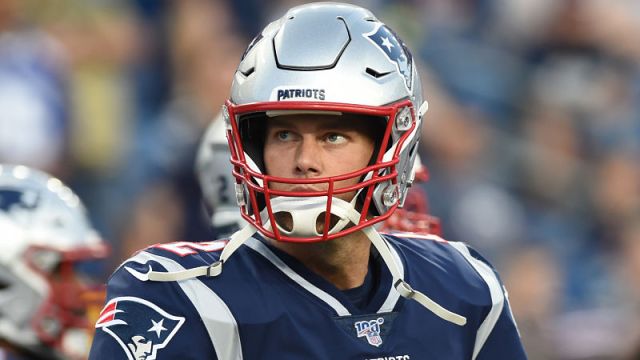