The Red Sox are back.

Boston opened up its slate of exhibition games Tuesday night against the Toronto Blue Jays at Fenway Park in the team’s first game since March.

Ryan Weber surrendered four earned runs over five innings with six strikeouts, while the Sox scored six runs with two home runs, but it wasn’t enough as Ryan Brasier gave up three runs in the ninth and the Red Sox lost 8-6.

GAME IN A WORD
Reminiscent.

It certainly was fun having baseball back on our television sets, but this game felt eerily similar to the 2019 Red Sox team — especially seeing the bullpen struggle late.

ON THE BUMP
— Weber got out of the first two innings unscathed before the Blue Jays got on the board.

Danny Jansen singled to center to lead off the third. Bo Bichette drove him in on a groud-rule double.

Vlad Guerrero Jr. cut Boston’s lead in half with a ground out to score Bichette.

Weber went 3 2/3 more innings without giving up a run before Rowdy Tellez — who has had massive success against Boston — hit a two-run home run to center field to bring the Blue Jays within two, 6-4, in the sixth.

Rowdy sent this one to the moon ? #BlueJays pic.twitter.com/BNgtrzpbNX

Weber’s night concluded when Teoscar Hernández grounded out to end the inning.

— Matt Barnes came in for the seventh and immediately was welcomed with a Derek Fisher homer to make it 6-5.

This Fish loves the hook ?

Barnes escaped the rest of the inning without further damage.

— Ryan Brasier put runners on the corners with nobody out to begin the ninth by giving up a wall-ball double to Tellez and a single to Hernandez.

It didn’t get any better as Brasier tried to pick off Hernandez at first, but Tzu-Wei Lin wasn’t ready and allowed Tellez to score from third to tie the game at 6-6.

Fisher hit his second homer of the game, a two-run shot, to give the Blue Jays their first and only lead of the night.

IN THE BATTER’S BOX
— Boston put together a four-run first in exciting fashion.

J.D. Martinez walked before Devers smacked a single to deep right to put two on with one out. Xander Bogaerts drove in Martinez with a single for the 1-0 lead.

Moreland stepped to the plate and stretched the advantage when he smashed a three-run bomb to center to give the home team a 4-0 edge.

MITCH MORELAND KICKIN' IT OFF ?? pic.twitter.com/3JtHFGghCX

— The Red Sox’s bats stayed silent until the fifth when Andrew Benintendi doubled off the Green Monster to bring Martinez to the dish. And the designated hitter did what he does best and smashed a two-run, 388-foot dinger to right to make it 6-2 Boston.

— The Red Sox had a chance to do some damage when they loaded the bases in the seventh, but couldn’t plate any runners and remained up 6-5.

— Boston tried to come and put the potential tying run at the plate in the bottom of the ninth down by two with one out, but a double play ended the game.

TWEET OF THE GAME
We did miss that sound.

Ah, the sounds of baseball ? pic.twitter.com/QcZyynv9WN

UP NEXT
Boston plays its second exhibition game against Toronto on Wednesday night. First pitch from Fenway Park is set for 7:30 p.m. ET. 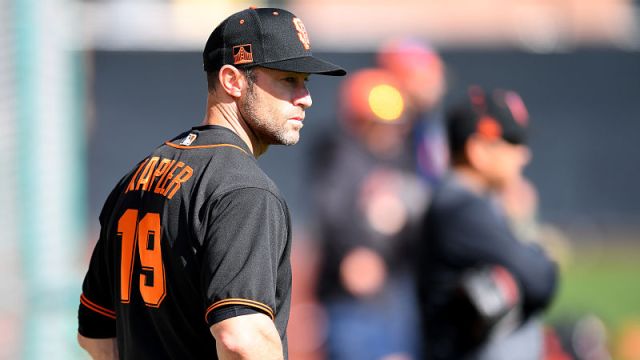