OK, we won’t go that far, but quarterback Cam Newton put together an impressive performance in his New England Patriots debut.

Newton, who rushed 15 times for 75 yards with two touchdowns and completed 15-of-19 passes for 155 yards, was clearly the star of the Patriots’ 21-11 Week 1 win over the Miami Dolphins on Sunday.

Newton proved he could still pick up key yards with his legs and showed impressive accuracy, poise and chemistry with key Patriots pass-catchers in the pocket.

Here’s who else stood out:

The veteran wide receiver caught five passes for 57 yards and carried the ball once for 23 yards.

He led the team with eight tackles in Week 1, including one tackle for loss, and intercepted Dolphins quarterback Ryan Fitzpatrick. Phillips let up three catches on three targets (cornerback Jonathan Jones was the target on Phillips’ interception) for 24 yards.

LB CHASE WINOVICH
Winovich proved he can be a three-down player by bringing pressure as a pass rusher and make run stuffs on early downs.

The second-year pro had five tackles, including a tackle for loss, and a quarterback hit.

CB JC JACKSON
The Patriots were stingy in pass defense all day. Jackson only let up two catches on four targets with a pass breakup and a fourth quarter interception.

Safety Joejuan Williams allowed just one catch on three targets for 9 yards with a pass breakup while focusing his attention on tight end Mike Gesicki. He was covering Gesicki on Jackson’s interception.

Jones let up just one catch on four targets for 8 yards. He was in coverage on the intended receiver, Isaiah Ford, on Phillips’ interception.

Cornerback Stephon Gilmore was flagged for pass interference twice. He let up five catches on eight targets for 63 yards but also intercepted Fitzpatrick.

PATRIOTS RUSHING ATTACK
The Patriots grounded and pounded for 208 rushing yards on 39 carries for 5.3 yards per attempt.

Tight end Ryan Izzo had key blocks on both rushing touchdowns by Newton. 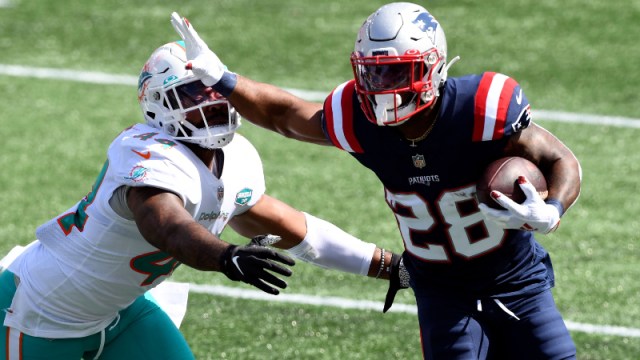 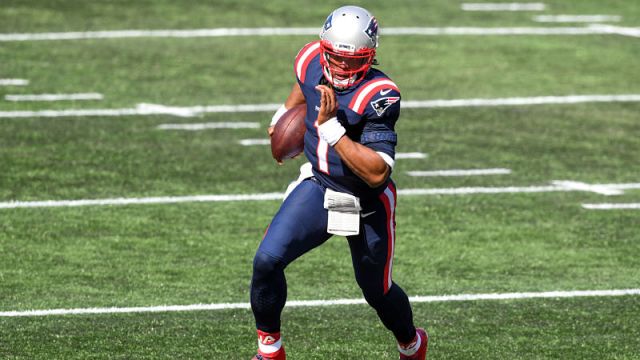