Final, Texans 27-20: The Patriots drove to the Houston Texans’ 24-yard line in the final minutes, but Cam Newton was sacked on fourth down, ending New England’s comeback bid and all but closing the book on their playoff hopes.

Quarterback Deshaun Watson turned in a dazzling performance for Houston, completing 28 of 37 passes for 344 yards and two touchdowns with no interceptions and adding six carries for 36 yards with a score on the ground. The Patriots frequently pressured Watson, but they finished with zero sacks and just two QB hits.

Wide receiver Damiere Byrd was one of New England’s top offensive performers, catching six passes on seven targets for a career-high 132 yards and a touchdown in a losing effort. Newton threw for 365 yards — his second-highest mark of the season — and the Patriots played turnover-free football for the third consecutive game.

The loss drops the Patriots to 4-6 on the season. The Texans improve to 3-7.

Fourth quarter, 4:11, Texans 27-20: Kyle Dugger might have gotten away with pass interference against Jordan Akins on third down, but the potential infraction went uncalled. The Texans kicked a field goal one play later to extend their lead back to seven points.

The Patriots now need a signature drive from Cam Newton.

Fourth quarter, 7:39, Texans 24-20: The Patriots opted for a field goal to trim Houston’s lead to four after a productive drive stalled just inside the red zone.

The 16-play, 65-yard march drained 9:25 off the clock and featured three key completions to Damiere Byrd, who’s up to a career-high 132 yards on six catches.

Third quarter, 2:04, Texans 24-17:The Texans tacked on a field goal after an 11-play, 57-yard drive that included two third-down conversions.

Will Fuller beat J.C. Jackson and Jonathan Jones for back-to-back receptions of 13 and 22 yards, but Jones later recovered with tight coverage on an end-zone incompletion to Keke Coutee.

After hooking up with Byrd for a 30-yard gain on third-and-10 earlier in the drive, Cam Newton heaved a half-field bomb to the speedy wideout for a 42-yard touchdown.

It was a great throw by Newton and an excellent catch by Byrd, who had to adjust his hands as the ball arrived.

Third quarter, 11:50, Texans 21-10: A scary moment in Houston, as Rex Burkhead crumpled on the field after taking a shot to the knee.

Burkhead was evaluated in the sideline medical tent and later was carted to the locker room. Minutes later, the team ruled him out with a knee injury.

Burkhead is in the midst of his best season as a Patriot, playing an integral role in New England’s offense as the team’s most versatile running back. He also had remained healthy up to this point, which had not been the case in previous years.

The Patriots now are down to just two running backs (Damien Harris and James White), as Sony Michel and J.J. Taylor both are inactive Sunday.

After a Jake Bailey punt, the Patriots’ defense delivered a critical stop, forcing its first three-and-out of the game. Rookie Josh Uche made a nice open-field tackle on Deshaun Watson on third down.

Halftime, Texans 21-10: The Patriots’ was downright helpless against Deshaun Watson in the first half, as a result, they trail by 11 at the break.

The Texans surged late in the half, closing out the second quarter with eight-play, 75-yard and nine-play, 90-yard touchdown drives.

Seldom-used wideout Keke Coutee evaded Jonathan Jones’ man coverage for Houston’s final score of the half. New England has struggled to cover Houston’s receivers and tight ends (Kyle Dugger had an especially rough half in coverage) and, most importantly, repeatedly have allowed Watson to wriggle out away from pressure.

The Patriots will receive the second-half kickoff. We’ll see if Josh McDaniels introduces Damien Harris back into the game plan. He’s been used sparingly since New England’s opening possession.

The Texans quarterback completed 3 of 4 passes for 52 yards and scrambled three times for 19 yards, including a 4-yard touchdown run during which he ran straight through Devin McCourty at the goal line.

Officials might have missed a hold against nose tackle Carl Davis on the scoring play.

Houston took the ball out of Watson’s hands just once on that drive, and backup running back C.J. Prosise was dropped in the backfield. The Texans’ ground game is a disaster, but the Patriots are having an incredibly difficult time corralling Watson, both as a passer and as a scrambler.

Second quarter, 8:32, Patriots 10-7: After a drive that featured a reverse to Damiere Byrd and a double pass (Rex Burkhead to Cam Newton to Jakobi Meyers), the Patriots reclaimed the lead on a 45-yard field goal by Nick Folk.

An offensive pass interference penalty on N’Keal Harry and a J.J. Watt batted pass stuck the Patriots in third-and-17, which, again, is not scenario this offense is built to operate in.

Newton dumped off a screen pass to James White, who picked up 9 yards to give Folk a more makeable field-goal try.

Second quarter, 13:45, 7-7: Deshaun Watson hit Darren Fells for a 16-yard gain, but otherwise, that was a solid response by the Patriots’ defense.

Kyle Dugger decked Duke Johnson with a powerful hit — the second time he’s done so today — Byron Cowart stopped Johnson for a short gain on second-and-10 and Chase Winovich drew a holding call that wiped out a third-down completion to Will Fuller.

First quarter, 1:20, 7-7: Damien Harris rushed for 7 and 4 yards on the first two plays of the Patriots’ latest possession, but the drive stalled once New England turned to the pass.

Cam Newton had to throw the ball away while under heavy pressure, then nearly had a short pass to newcomer Donte Moncrief intercepted. Facing third-and-10, Josh McDaniels called a screen pass to Rex Burkhead, who immediately was swarmed.

In order to play to their offensive strengths, the Patriots must avoid these third-and-long situations.

First quarter, 3:34, 7-7: The Texans have one of the NFL’s worst records this season, but they still have Deshaun Watson.

Watson carved up New England’s secondary on Houston’s second possession, hitting Brandin Cooks for 44 yards and Jordan Akins for 22 before firing a laser to Randall Cobb for a 3-yard touchdown.

The Texans ran the ball just once during that scoring drive (Kyle Dugger, a starter for the second straight game, dropped Duke Johnson for a 2 yard loss). Watson went 5-for-5 for 75 yards against a full-strength Patriots secondary.

After New England’s defense opened the game with a three-and-out, Cam Newton led a 10-play, 84-yard drive that culminated in a 9-yard touchdown run by Damien Harris.

The biggest play of that possession, though, was a 34-yard to screen pass to James White, who’s been curiously absent from the Patriots’ game plans in recent weeks. The 34 receiving yards surpassed White’s total from the last two games combined (32).

First quarter, 15:00, 0-0: The Patriots won the opening coin toss and chose to defer. Deshaun Watson and the Texans will get the ball first.

11:30 a.m.: Despite being activated off injured reserve yesterday, running back Sony Michel is inactive for Week 11.

Damien Harris will maintain his role as New England’s No. 1 back.

Moncrief, Thomas and Mack will make their Patriots debuts Sunday.

The Texans, meanwhile, will be without starting left tackle Laremy Tunsil (illness) and starting left guard Senio Kelemete (concussion), both of whom are inactive.

Also, David Johnson, Houston’s leading rusher, is on injured reserve and will not play against the Patriots.

9 a.m. ET: The New England Patriots will look to extend their winning streak to three games Sunday afternoon as they visit the scuffling Houston Texans.

The Patriots, who sit at 4-5 following back-to-back victories over the New York Jets and Baltimore Ravens, made the following roster moves Saturday:

— Elevated wide receiver Donte Moncrief from the practice squad for the first time.

— Promoted linebacker Terez Hall from the practice squad to the 53-man roster.

The following 14 players are listed as questionable for New England:

Gilmore is expected to play after sitting out the last three games, according to multiple reports.

Kickoff is set for 1 p.m. ET at NRG Stadium. Click the link below to read our full game preview and follow along here throughout the day for up-to-the minute pre- and in-game coverage.

Patriots Vs. Texans Preview: What To Watch For In Week 11 Matchup 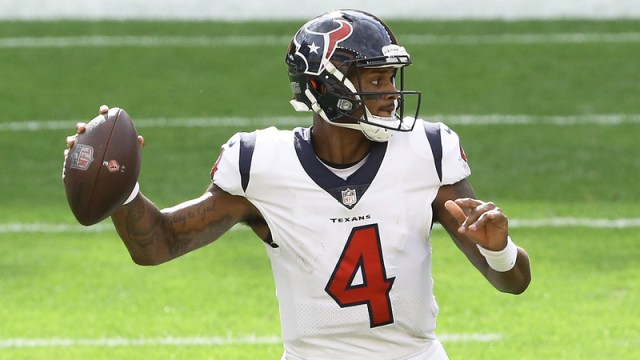 These Stats Show Just How Good Deshaun Watson Was In First Half Vs. Patriots 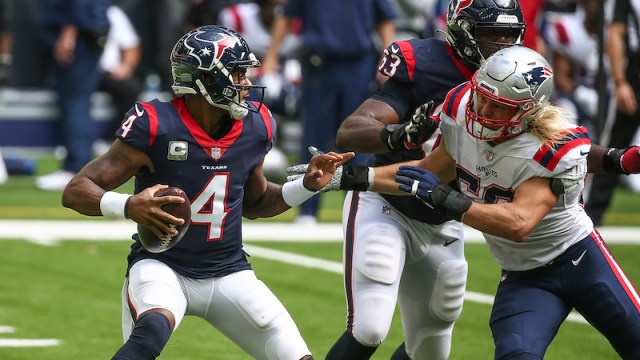