A little luck was on the Patriots’ side Sunday afternoon in South Beach.

There appeared to be a significant momentum swing in the second quarter of New England’s Week 15 matchup against Miami when Cam Newton fumbled as the visitors approached the red zone. Newton on a third-down run was stripped by Byron Jones, and the bouncing football was corralled by Xavien Howard, who took it back 86 yards to the house.

The score would’ve given the Fins a 6-3 lead, but upon official review, the initial call on the field was overturned. Before Howard gained control of the football, it hit the knee of Christian Wilkins as the Miami defensive lineman had a foot out of bounds. The dead ball returned possession to the Patriots, who responded with a 36-yard field goal from Nick Folk.

You can watch the play unfold in the video here.

New England took a 6-0 lead into halftime at Hard Rock Stadium. Stephon Gilmore already was in the locker room before the first-half whistle sounded, as the star cornerback exited the game due to an apparent knee injury. 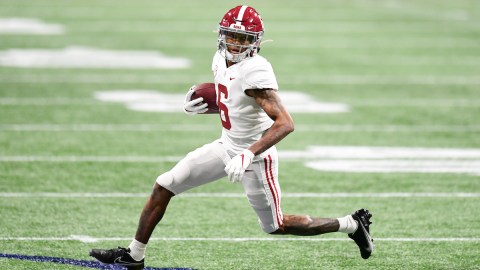