The Brooklyn Nets are not the first to try and build a “Super Team.”

It’s been done many times in the past, perhaps most notably with the Golden State Warriors just a few short years ago. Kevin Durant, as you may remember, joined that Warriors squad with Steph Curry, Klay Thompson and Draymond Green.

Fast forward almost five years later and Durant finds himself in the situation again. But this time it comes after the Brooklyn Nets traded for seven-time All-NBA selection James Harden. Harden was the centerpiece of a four-team blockbuster deal that reportedly went down Wednesday. (You can get the details here.)

It means Harden will join Durant, along with two-time All-NBA honoree Kyrie Irving. 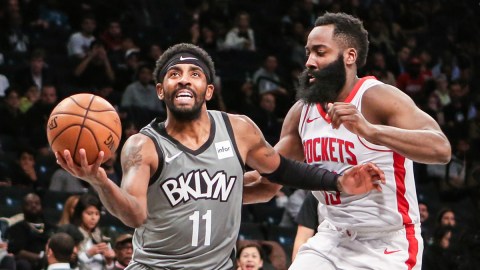 Upon first digesting news, NBA fans everywhere had to be left thinking one thing: ‘How will that work?’ After all, Harden enters Brooklyn as one of the most ball-dominant players in the league, and Irving needs to ball in his hands to make things happen, too. Oh yeah, and then there’s the fact that Durant arguably is the best player among the three.

It makes a previous quote from Harden, back in 2016 when Durant signed with that Warriors team, hit a little differently.

“Obviously the Warriors are a really good team … but there’s only one basketball,” Harden told reporters at the time. “You’ve got to figure it out.”

Of course, the Warriors did figure it out. Golden State won consecutive NBA titles in 2017 and 2018, and made it to a third in 2019, before Durant left for Brooklyn.

Now we’ll see if Harden, Durant and Irving are able to do the same.