BOSTON — Jayson Tatum is in the midst of something special.

The 23-year-old logged 30 points in Monday’s defeat of the Houston Rockets. That’s become somewhat of an everyday occurrence for him lately, as that marked his fourth consecutive game with at least 30 points. It’s the second-longest streak of 30-point games in his career — he reached five in February 2020.

It’s also especially encouraging considering Tatum was in a bit of a slump to start the season. Leading into the four-game stretch, he was hitting just 37.5% of shots from the field.

After the win — the third in a row for the Celtics — head coach Ime Udoka explained what he’s noticed from his young star amid his recent tear.

“Being extra aggressive,” Udoka said. “I think attacking the basket a little bit more, getting a little more free throws that happened over the last few games. But still doing what he did early, getting the same shots that he was missing that we knew would flip eventually. But he’s also finding guys, passing the ball extremely well. So very well-rounded games in general. The scoring is there because of the made shots but we never overreacted to that in the first place.”

Tatum has had to pick up some slack with his usual partner in crime, Jaylen Brown, sidelined with a hamstring strain for eight games. Brown returned to the floor Monday and put up 19 points while on a minutes restriction against the lowly Rockets — so if there ever was an opportunity for Tatum to slow down and catch his breath, it would’ve been then. But he continued to drain buckets anyway.

The forward also finished the night with six rebounds and three assists. 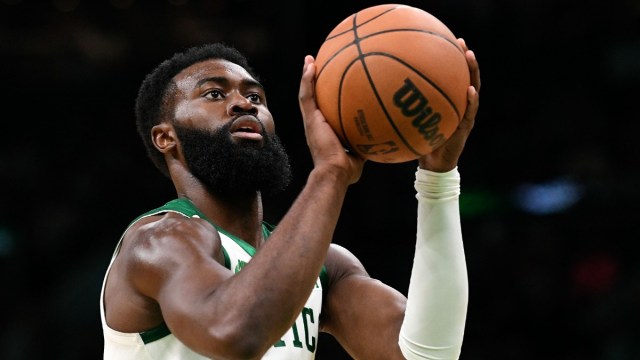 Celtics Absolutely Gush Over Jaylen Brown In Return To Lineup