Final, Jaguars 31-24: And that will do it for the New England Patriots’ first preseason game of 2017.

The Patriots will travel to White Sulphur Springs, W.Va., next week for two joint practices with the Houston Texans ahead of preseason game No. 2 next Thursday at NRG Stadium.

Fourth quarter, 4:50, Jaguars 31-24: A 43-yard pass interference gave the Patriots prime field position at the Jaguars’ 14-yard line, but their drive stalled when Jacoby Brissett was unable to hit Jacob Hollister in the end zone on fourth-and-5.

It’s Jaguars ball as the clock winds down in this one.

Jason Myers missed a 53-yard field goal to give the ball back to the Patriots.

The undrafted rookie tight end now is up to six catches for 115 yards in this game — both team highs — and he showed off some impressive athleticism on New England’s latest drive by hurdling a Jaguars defensive back along the sideline.

The drive culminated in a D.J. Foster rushing touchdown, which came on fourth-and-goal from the 1.

After surrendering a 97-yard touchdown pass in the first half, Jones was burned again on a 42-yard scoring strike from Brandon Allen to Dede Westbrook. Jordan Richards also failed to provide support over the top.

Here's the All-22 on that Jaguars touchdown. Cyrus Jones is actually bad while Dede Westbrook is actually good. #analysis pic.twitter.com/NhMf0Bt4zQ

Earlier in the drive, Elandon Roberts, who has played nearly the entire game, walked off very slowly after suffering an apparent injury.

Third quarter, 5:14, Jaguars 24-17: After a Jaguars punt, Jacoby Brissett takes over at quarterback for the Patriots.

Third quarter, 7:28, Jaguars 24-17: A promising Patriots drive stalled after running back D.J. Foster lost a fumble inside the red zone — a definite no-no for a player who needs to knock his coaches’ socks off this preseason to earn a spot on this team.

Foster’s fumble came after another long completion to Jacob Hollister, who now is up to four catches for 82 yards tonight. He’s sure making the most of his reps with fellow tight ends Rob Gronkowski, Dwayne Allen, Matt Lengel and James O’Shaughnessy all out.

On the first play after Stephen Gostkowski’s kickoff, running back Corey Grant took a handoff right up the gut and galloped 79 yards, prompting an epic facepalm from Patriots defensive coordinator Matt Patricia.

When your defense gives up a 79-yard touchdown run. pic.twitter.com/KJKzZFkPMc

Linebacker Elandon Robers and safety Jordan Richards should expect to face Patricia’s wrath in the film room this week, as both were caught out of position on the play.

Hollister, who’s having a very strong game in his Patriots debut, was comically open on the play.

That is not how you football, Jacksonville defense. pic.twitter.com/wsemNs92mO

After a rush by D.J. Foster and three more by LeShun Daniels, Garoppolo hit receiver K.J. Maye on a screen pass for a 6-yard touchdown, tying the score. The Patriots’ backup quarterback has completed 11 consecutive passes and 19 of 24 overall.

Third quarter, 14:50, Jaguars 17-10: Jimmy Garoppolo remains in the game at quarterback for the Patriots as we begin the second half.

Halftime, Jaguars 17-10: Austin Carr is putting on quite the show tonight.

The undrafted rookie wide receiver caught three passes on the Patriots’ final drive of the first half, including a tiptoe grab down the right sideline for 20 yards and an acrobatic, leaping catch in the end zone that gave New England its first touchdown of the preseason.

This catch by #Patriots Rookie Austin Carr is STUPID pic.twitter.com/ilfhbCNf6i

Jacob Hollister also came up with another tough catch during the drive, withstanding an illegal hit to the head that resulted in a 15-yard penalty.

The drive that preceded Gostkowski’s miss featured some nice plays by Patriots skill players, as Jimmy Garoppolo found Austin Carr and Jacob Hollister to convert on third-and-7 and third-and-11, respectively.

Carr reached back to snare a pass that was behind him, and Hollister absorbed a big hit across the middle but held onto the ball.

Second quarter, 9:03, Jaguars 10-3: The first touchdown of the night came at the expense of Cyrus Jones.

Jones, who’s earned praise for his work as a return man this summer, just got burned to a crisp by undrafted rookie Keelan Cole on a go route, resulting in a 97-yard score for the Jaguars.

This is a great throw by Chad Henne and incredible speed by Keelan Cole. 97-yard touchdown. Jaguars up 10-3. pic.twitter.com/z0LfLfYdRH

Not ideal for a player who entered camp squarely on the roster bubble.

Second quarter, 9:16, 3-3: The Patriots’ third offensive series was a brief one, with Jimmy Garoppolo and Co. going three-and-out. A brilliant 53-yard punt by Ryan Allen pinned the Jaguars at their own 3-yard line, though.

Second quarter, 10:48, 3-3: Patriots defensive end Deatrich Wise was very slow to get up after helping shut down a Chris Ivory rush. He appeared to take a hit to the head.

Wise took a knee or leg to head pic.twitter.com/RllSTyNwpq

Wise, who has been one of the standouts of Patriots training camp so far, eventually walked off under his own power after being examined by team trainers. He exited down the stairs to the locker room, so it’s unlikely we’ll see him back on the field tonight.

Jaguars kicked Jason Myers proceeded to miss a 50-yard field goal a few plays later, bringing the Patriots’ offense back onto the field. Jimmy Garoppolo remains in at quarterback.

End first quarter, 3-3: That’ll do it for the first quarter. Jacksonville, which now has backup Chad Henne in at quarterback, has the ball at its own 21.

First quarter, 0:51, 3-3: Stephen Gostkowski drilled his first field goal of the preseason, a 43-yarder, to knot the score.

Jimmy Garoppolo looked sharp on that drive, completing 4 of 5 passes and hitting Glenn Gronkowski and Austin Carr for first downs. New England’s best play of the night so far, however, came courtesy of Brandon Bolden, who rumbled for 24 yards on third-and-2.

Give an assist to center Ted Karras, who pancaked Malik Jackson to pave the road for the running back. Devin Lucien also had some nice blocking downfield.

First quarter, 6:19, Jaguars 3-0: Jacksonville drove to the Patriots’ 9-yard line, but New England’s defense tightened up near its own goal line, forcing the visitors to settle for a field goal.

Rookie Leornard Fournette carried the load for the Jags on that drive, rushing five times for 21 yards.

Cyrus Jones, who had major issues returning punts and kicks last season, has caught one of each successfully so far tonight.

First quarter, 11:01, 0-0: The Jaguars and Patriots traded brief drives to open the game, with Jacksonville’s ending on a third-down drop by Rashad Greene and New England’s coming to a close when left tackle LaAdrian Waddle missed a cut block on Yannick Ngakoue, resulting in a Jimmy Garoppolo sack.

Most household names are sitting this one out for the Patriots, as their starting offense and defense are made up entirely of backups and rookies.

7:35 p.m.: The Patriots will begin the 2017 preseason on defense. They won the opening coin toss and deferred. It’s go time.

7:10 p.m.: Per warmups, rookies Deatrich Wise and Harvey Langi will start tonight at defensive end and linebacker, respectively. Both have impressed thus far in training camp and joint practices.

7 p.m.: Though several Patriots starters are not expected to play tonight, nearly the entire 90-man roster is on the field in full pads for warmups.

6:25 p.m.: From the “for what it’s worth” file: Fullback James Develin and offensive tackle Conor McDermott currently are practicing long snaps. The Patriots lost their backup long snapper behind Joe Cardona when Rob Ninkovich retired.

6:27 p.m.: Though teams are not required to announce their inactives during the preseason, the Jaguars decided to do so tonight. Their inactive list includes cornerback A.J. Bouye, defensive lineman Calais Campbell, wide receiver Allen Hurns and former Patriots running back Tyler Gaffney.

Not playing tonight vs @Patriots:

5:46 p.m.: One notable name among the 35 or so Patriots players currently stretching out on the field: James O’Shaughnessy.

O’Shaughnessy, who is battling Matt Lengel, Jacob Hollister and Sam Cotton for the third tight end spot, was limited in practice all week.

5:36 p.m.: If you missed our pregame show with Rachel Holt (@ItsRachelHolt), Doug Kyed (@DougKyed) and myself (@ZackCoxNESN), you can watch the full show right here:

5:30 p.m.: Jeff Howe of the Boston Herald offered an update on Patriots special teams ace Matthew Slater, who has not practiced since last Thursday.

Matthew Slater, who hasn't practiced since last week, has a hamstring injury, per source. His recovery timetable is unclear.

2:50 p.m.: We’re less than five hours from kickoff at Gillette Stadium. To help you get ready for the game, here are a few Patriots-related stories you might have missed from this week:

— The rise of rookie defensive tackle Adam Butler, one of the biggest surprises of camp so far

— Rob Gronkowski wows in his best practice of the summer

— Is Vince Wilfork, who officially retired this week, a Hall of Famer?

— Wilfork’s challenge to this year’s loaded Patriots team: “Prove it”

8 a.m. ET: After more than six months, we finally can say it: The New England Patriots have a football game.

The Patriots will host the Jacksonville Jaguars at Gillette Stadium in the preseason opener for both teams — New England’s first game of the summer after 12 training camp practices.

We won’t see several big-name Patriots in this one — quarterback Tom Brady, tight end Rob Gronkowski, running back Mike Gillislee and wide receivers Brandin Cooks and Julian Edelman all are not expected to play, according to a report from the Boston Herald’s Jeff Howe — but tonight’s contest will offer us a glimpse at dozens of players hoping to crack the team’s final 53-man roster.

That group features a number of rookies who will be donning Patriots jerseys for the first time, including training camp standouts Deatrich Wise, Harvey Langi and Adam Butler. All three could see time with the first-team defense against the Jaguars, as could Derek Rivers, the team’s top pick in the 2017 NFL Draft.

In addition to Brady, Gronkowski, Gillislee, Cooks and Edelman, we also expect the following players to be inactive, based on their status in practice this week:

Stay tuned throughout the day for updates and analysis leading up to kickoff, which is set for 7:30 p.m. ET. 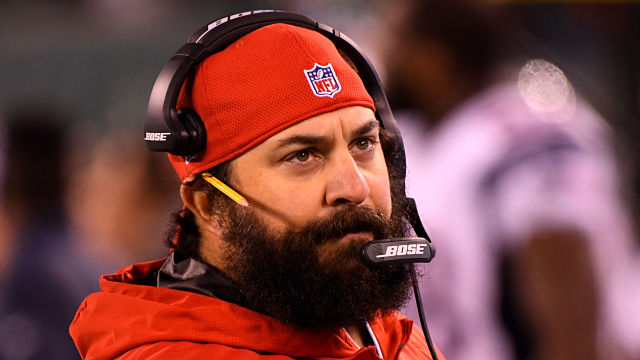 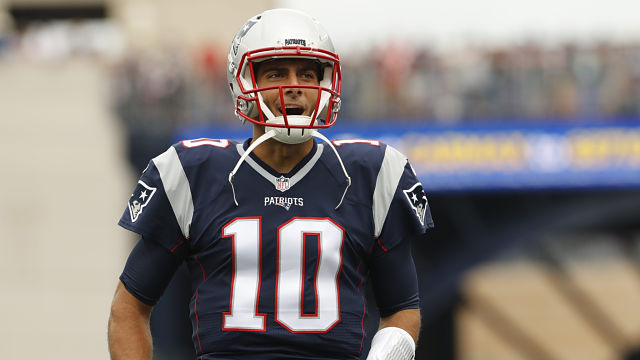