If we told you Michael Chavis essentially would be the difference maker for the Boston Red Sox on Saturday, would you believe it?

The Red Sox top prospect blasted a double to center in the top of the ninth inning in a 5-5 game against the Tampa Bay Rays at Tropicana Field, moving Jackie Bradley Jr. to third before Andrew Benintendi plated Bradley on a sacrifice fly to give Boston a 6-5 lead for good.

But that wasn’t even the biggest story of the game.

The Rays had a chance to win the game in the bottom half of the ninth with two on and two out, but Tommy Pham was picked off by Christian Vazquez when he was caught getting just a bit too comfortable with his lead at first base.

Rick Porcello had his best outing of the season, tossing 5 2/3 innings giving up two earned runs, struck out five and walked just one batter. But the righty was tagged with the no-decision after the bullpen imploded and gave away the four-run lead Boston had most of the game.

The Red Sox did suffer a loss despite winning the game when Mitch Moreland exited in the third inning with back spasms.

GAME IN A WORD
Bonkers.

The Rays made it interesting by tying it late in the game, but Chavis came through for the Sox, coupled with a strong outing from Porcello, and that insane ending.

ON THE BUMP
— Porcello pitched around a Pham single in the first, but couldn’t get out of the second inning unscathed.

The right-hander served up a 2-1 fastball to Avisail Garcia that he sent up and out of Tropicana Field to put Tampa Bay on the board and cut Boston’s lead to 5-1.

.@AvisailGarcia LAUNCHES one out of here for his 4th HR of the year!???

Tampa Bay chipped away at its deficit in the fourth when Ji-Man Cho led the inning off with a triple and later was plated when Brandon Lowe sent a triple of his own to right field to make it 5-2. But Porcello got out of the frame without any further damage done.

Porcello ran into some trouble in the fifth when he walked Michael Perez and hit Austin Meadows to bring the tying run to the plate. Pham ended the inning when he grounded out to Rafael Devers who turned the double play to end the threat.

The right-hander’s night was over in the sixth when he gave up a single to Lowe after getting the first two outs of the inning.

— Heath Hembree got the call to the mound and recorded the final out of the frame.

The righty gave up a triple to Kevin Kiermaier to begin the seventh and was lifted after Lin made the first out.

— Bobby Poyner relieved Hembree and gave up a walk to Guillermo Heredia before surrendering the fourth Rays triple to clear the bases and bring the game within one.

.@austin_meadows smacks a 2-RBI triple to bring @Raysbaseball within 1!? ?

— Marcus Walden was the third pitcher of the seventh and got out of the jam by inducing back-to-back strikeouts.

— Matt Barnes gave up the tying run in the eighth on a Yandy Diaz home run to right that wrapped around the foul pole.

The right-hander responded by striking out the next three batters.

— Ryan Brasier surrendered a leadoff single in the ninth and a two-out single, but Vazquez caught Pham taking too big a lead at first and threw down to Steve Pearce to end the game.

IN THE BATTER’S BOX
— The Red Sox loaded the bases with one out in the top of the second after a J.D. Martinez single, followed by back-to-back walks from Charlie Morton. But Tzu-Wei Lin struck out in a three-pitch at-bat. But Sandy Leon was hit to move the runners up and take a 1-0 lead.

But more damage was done by Benintendi when he blasted the first pitch he saw from Morton to left-center field for a grand slam. The play was reviewed for fan interference, but didn’t change and Boston found itself up 5-0.

— The Red Sox tried to extend their 5-4 lead when Pearce, who entered the game after Moreland’s exit, doubled to lead off the eighth before Martinez drew a walk to put two on with nobody out. Pearce moved to third on a Xander Bogaerts line shot to second that resulted in a double play that certainly saved the Rays from falling into a deeper hole. Devers popped out to strand Pearce and end the inning.

— Bradley began the ninth with a single in a 5-5 game and after Lin recorded the first out of the inning, Chavis made his Major League Baseball debut and wasted no time in collecting his first hit with a deep double to center.

Benintendi drove in his fifth run with a sacrifice fly to plate Bradley and make it 6-5.

— Mookie Betts had two hits on the night, while Benintendi, Pearce, Martinez, Devers, Bradley and Chavis all had one.

In his first MLB at-bat, Michael Chavis hits a missile to the CF wall for a double against maybe the most dominant pitcher in baseball this year, Jose Alvarado.

UP NEXT
Boston closes out its three-game set with the Rays on Sunday afternoon when David Price takes the mound for the Red Sox opposite of Tyler Glasnow. First pitch from Tropicana Field is set for 2:10 p.m. ET. 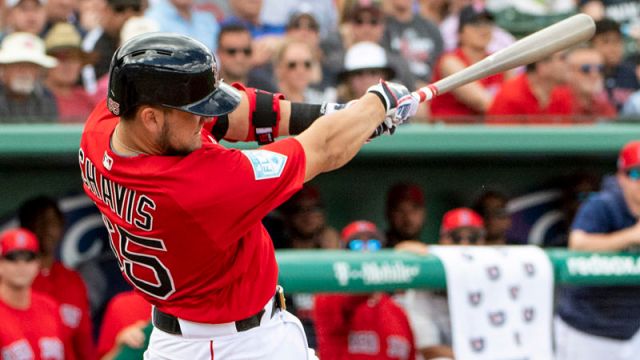 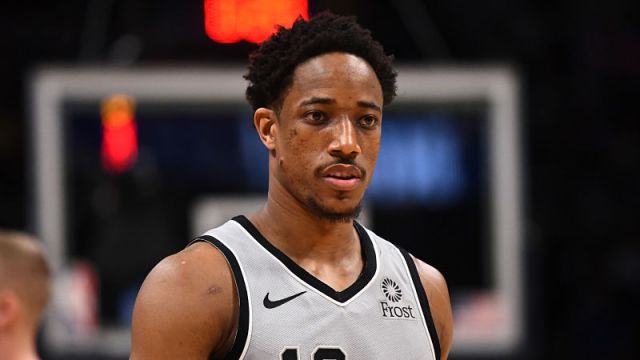